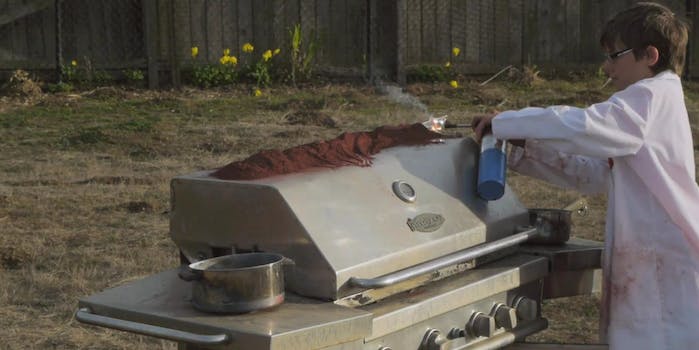 This grill never stood a chance.

Underclassmen in high school should never, ever play with substances that reach 6,000 degrees Fahrenheit; things like that should only be handled by trained professionals, with stockpiles of licenses and safety gear, under strictly controlled conditions. That said, we’re glad that 15-year-old Tyler Barlow decided to stick an old barbecue in a grassy field and ignite 5 pounds of thermite on top of it, because the resulting video is super cool:

“The most amazing thing about thermite is it’s made of very common materials,” Barlow says in the video. Where was this guy and his sack of lab tested, 99.5% pure aluminum powder when Walter White was emptying a pile of Etch-A-Sketches to get the stuff?

It’s actually a bit terrifying that thermite is this simple to create. It’s also terrifying that nobody’s wearing tinted eye-wear in the video, because watching thermite ignite can permanently damage your retinas. And since this is a self-oxidizing reaction, that fire extinguisher won’t actually stop it from burning. The closed-toe shoes are a good idea, though.

Finger shaking aside, Barlow makes for a great host, and the production value here is top-notch. Lucky for us, this is only the first episode of his new web series, The Boom Show, which means there should be plenty more fiery circumstances on the way. But please, Barlow: Take care to not blow yourself up for our entertainment. We want The Boom Show‘s final episode to be a planned event.