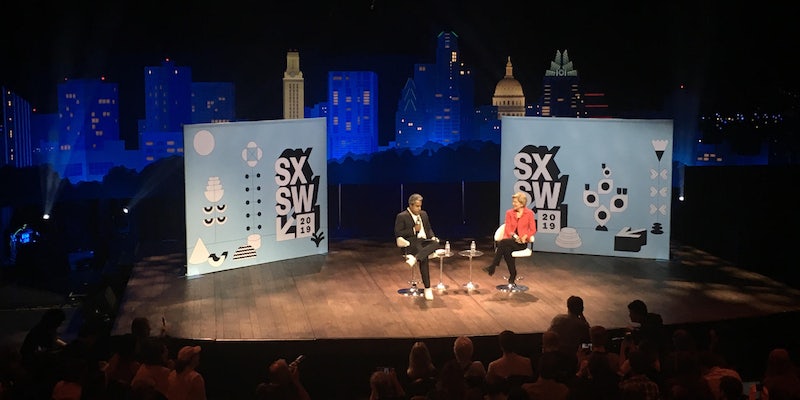 The presidential contender makes her case.

Yes, Sen. Elizabeth Warren (D-Mass.) wants to break up tech giants like Facebook and Amazon—but don’t call her a democratic socialist, she told the SXSW conference Saturday in Austin, Texas.

“Bernie has to speak to what democratic socialism is and the centrists have to speak to whatever they’re doing,” she told attendees gathered at the Austin City Limits’ Moody Theater. “All I can tell you is what I believe and that is there’s an enormous amount to be gained from markets. Markets create opportunities.”

Toward the end of the hourlong chat, Warren answered a “lightning round” series of questions from moderator and Time editor-at-large Anand Giridharadas. Yes, she thinks President Donald Trump is a racist, and yes, she considers herself a populist. She also thinks marijuana should be legal, that it’s “time to start the conversation” on reparations, and her favorite U.S. president is Theodore Roosevelt. Her favorite feminist icon is Frances Perkins, who was secretary of labor in 1933.

“Some of you don’t even know,” she riffed about Perkins.

Warren also used the lightning round to talk pop culture: She likes Marie Kondo, and reads two books a week because she speeds up her audio setting to “three-quarter speed” (she’s on book No. 5 of the Victor the Assassin series). Her favorite series to binge is The Wire. She thinks Rep. Alexandria Ocasio-Cortez (D-N.Y.) is correctly hyped. Her favorite adult beverage is Michelob Ultra.

Warren was in campaign mode, here jovial and eager to more formally introduce who she is to a young audience of tech and tech-adjacent employees. But she also told them directly why she wants to break up tech giants, which she announced this week.

“It’ll be more fun to work there,” she said, arguing that companies like Amazon have a monopoly on the competition. “It’s a little bit like baseball: You can be an umpire—a platform—or own teams.”

She said that venture capitalists are hesitant to invest in enterprises that go into the “kill zone” and function via Facebook and Amazon. She said breaking up these companies will lead to a “much more competitive, robust market in America.” She compared these companies to the railroads under Roosevelt: “The railroads were the place you had to be. … You had to get your wheat or your corn onto the railroads.”

Warren also said she was worried about the vast amounts of information-gathering done by companies like Amazon, and noted that even Amazon’s Nest thermostat “has a bucket of information embedded in it about when you wake up and when you go to bed.”

She also said that a “core progressive economic agenda” polls well and is “not only is wildly popular among Democrats and independents—a majority of Republicans support that proposal.”

Warren was also asked about a rumor that Sanders had privately discouraged her from running in 2020.

“So Bernie and I had a private dinner and my view is that dinner stays private,” she said.

Warren here made an effort to display enough progressive, soundbite-friendly candor to make a Chapo Traphouse fan tune in, while also framing herself as a more realistic alternative to Sanders.

“We are a nation that was founded on high-minded principles—and on the backs of slaves,” she said. “We fail to acknowledge the other half of that story.

“We can’t be the country of our best ideas,” she added, “until America confronts its racial history and the institutional inequality it’s created.”

Warren is the most high-profile 2020 candidate in Austin. Former Ohio Gov. John Kasich (R) was the opener along with Starbucks man Howard Schultz and Sen. Amy Klobuchar (D-Minn.). The centrist Republican hinted that Trump was an authoritarian ruler, flirted with a presidential run himself, talked about his “evolution” as a political thinker while side-stepping hard stances on abortion, and name-dropped celebrities. Wearing sneakers, he seemed to embrace American tech’s casual dress code.

“Al Pacino told me never to be a name-dropper,” Kasich deadpanned, after talking about Drake, Justin Bieber, Post Malone, and Tesla cars. He’d go on shout out Bono, Arnold Schwarzenegger, Amazon AI helper Alexa, and slain war journalist Marie Colvin. He also didn’t seem to like all of those electric scooters. (“I’m not getting on the scooters.”)

“My party has devolved,” Kasich said, adding that “normal Republicans” need to step up on climate change, immigration reform, and income inequality.