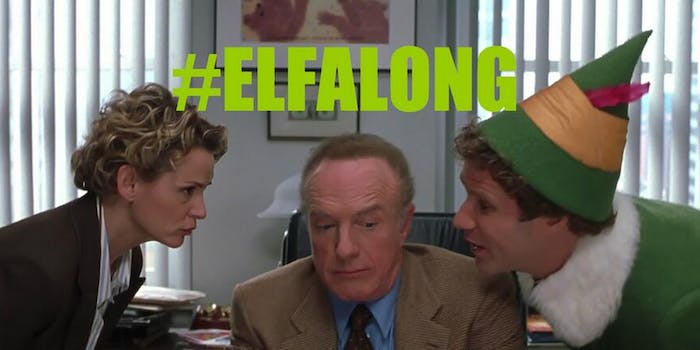 Some traditions are so important that Christmas just doesn’t feel right without them.

Some traditions are so important that Christmas just doesn’t feel right without them. And one of those, apparently, is sitting down to watch the Will Ferrell comedy, Elf.

When British TV viewers realized that for the first time in years, Elf would not be shown on the public Channel 4, they were horrified. Although the movie only came out in 2003, it’s already become a Christmas institution, marking the start of the holiday season. Unfortunately, the subscription-only (and Murdoch-owned) Sky Movies channel bought the film rights this year, leaving most of the nation in a disappointingly Elf-free zone. Something had to be done.

For the past week, the hashtag #Elfalong has been spreading across British Twitter like holiday cheer. Started by Guardian TV critic Stuart Heritage, who was one of the first to notice the absence of Elf on this year’s Christmas viewing schedule, the #Elfalong was a plan for everyone to organize their own shared Elf event. People set their DVDs to play at 3pm on Sunday, Dec. 8, so Britain could enjoy its annual Will Ferrell appreciation day without having to pay the middleman.

Elf has been watched, Christmas may now commence. #elfalong

“This Elfalong thing has got a bit out of hand,” wrote Heritage in the Guardian, hours before the mass viewing was scheduled to begin. “But that just speaks to how beloved Elf is.” Even the film’s director Jon Favreau got involved, publicizing the #Elfalong to his 1.6 million followers.