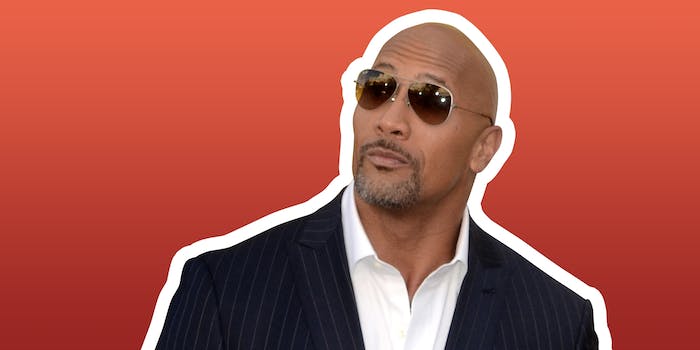 Dwayne ‘the Rock’ Johnson is officially a YouTube star

Lilly Singh guides Johnson through the wild world of YouTubing in debut clip.

Dwayne Johnson is already shaking things up with his arrival on YouTube, exposing the platform’s deepest and darkest secrets.

OK, it’s a joke, but the Rock is able to cull a ton of YouTube star power in his much anticipated debut with cameos from Roman Atwood, Flula, and Grace Helbig, among others. The video follows Johnson on a tour of the secret island facility where all the YouTube videos are actually made, according to tour guide and ultimate Rock fan Lilly Singh. They pop into the cat room, couples room, viral video room, give Gigi Gorgeous some tips in the makeup video room, and obliterate a squad of Rock impersonators in their sendup of YouTube tropes.

Singh and Johnson did an accompanying video on Singh’s 9.2 million subscriber channel, “How to Be a YouTube Star,” to help Johnson embrace his new medium.

While the video is in jest, it’s also a great resource for what a new YouTuber needs to know—exciting thumbnails, outro prep, and just being yourself—all while Singh gets to live out her own Rock fantasies.

The Rock’s Seven Bucks Digital Studios, a partnership with Studio71, will premiere videos each Monday and Friday.