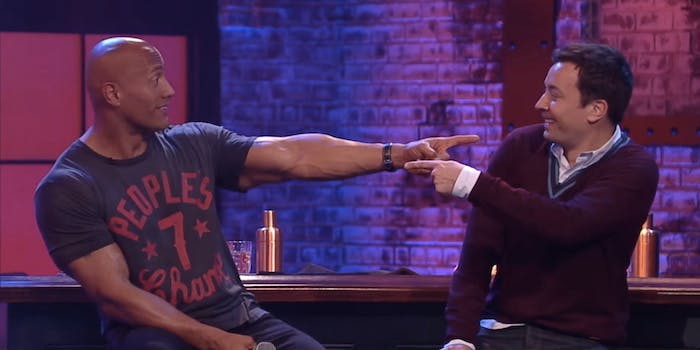 Last night, the Rock won the only championship belt that matters.

“The entire planet, they want to know: What’s your first song going to be?” a leather-clad LL Cool J asks Dwayne “The Rock” Johnson.

Standing inches taller than LL, Johnson loosens up his shoulders and speaks into the mic, “The world wants to know, first song… [dramatic pause] ‘Tay Tay.’” The audience cheers. Johnson’s opponent, Jimmy Fallon, interjects that nobody knows who “Tay Tay” is. Johnson’s voice becomes gruff, gravelly—the timbre with which we came to know just what it was that the Rock was cookin’. “We got a guy like [Fallon], he’s been running his mouth all week, telling the world he’s gonna beat me. [But] like we all do when we hear trash talk, we just,” he brushes imaginary dust off his shoulders, “shake it off.” The music starts, and Johnson—athlete, professional wrestler, action star—breaks out in lip sync, Taylor Swift’s voice blasting out of the speakers.

Spike’s Lip Sync Battle, which premiered Thursday, is a spin-off of The Tonight Show Starring Jimmy Fallon.  The popular segment proved a viral success with the stars like Emma Stone—whose performance of Blues Traveler’s “Hook” and DJ Khaled’s “All I Do Is Win” is still a top-viewed segment with over 47 million views on YouTube.  Spike is gunning for that viral success of Fallon’s popular segment, and the network is pulling out the big guns (pun intended) in its first episode with Dwayne Johnson.

Johnson performs “Shake It Off” with confidence and gusto, as if he sings along to Taylor Swift tunes in his Humvee (he can only fit in a Humvee, right?) on the way to the set. In fact, Fallon rightly accuses him of that. Johnson’s no stranger to Taylor Swift’s pop magic, just as he’s no stranger to subverting the expectations placed on an actor of his ilk. The musclebound action hero relishes each off-the-clock opportunity he gets to play against type, the hyper-masculine tough guy.

Dwayne Johnson is America’s modern action hero. In 2013, Hollywood experienced a boom in films starring Johnson, including Pain & Gain, Snitch, Fast & Furious 6, and GI Joe: Retaliation, shortly followed by his titular role in Hercules (2014), where audiences everywhere could finally see him wearing a lion for a hat. This weekend’s Furious 7 premiere further solidifies Johnson’s role as a mainstay in American action film.

He’s no stranger to subverting the expectations placed on an actor of his ilk.

When Johnson wields a Gatling gun in Furious 7 and the similarly phallic .50 caliber machine gun in GI Joe: Retaliation, he hearkens back to the heroes of the ’80s—Stallone and Schwarzenegger—when big guns and big muscles were symbolic prerequisite for action-hero masculinity. But unlike the heroes of the 1980s, Johnson distances himself from the man on the screen and the Rock in the ring.

During his most recent Saturday Night Live appearance, Johnson parodied the very genre that pays his bills in a gritty remake of Disney’s Bambi. The revenge-flick finds Bambi, played by a cigar-smoking Johnson, teamed up with Thumper (Vin Diesel), Flower (Tyrese Gibson), and Faline “the girl Bambi” (Michelle Rodriguez). The actors—all performing with hyperbolic accuracy—look more like people you’d find at a furry convention, including Johnson, who gets big cheers for his appearance with a painted face and oversized ears. The clip is full of oversaturated shots like you’d find in one of the Fast & Furious movies, horrible one-liners, and excessive killing. On SNL, Johnson isn’t afraid to poke fun at his genre, wear a dress, or sing about himself as “franchise Viagra,” a reference to the box-office draw he’s added to existing film series.

It’s that sense of humor and fearlessness that sets Dwayne Johnson apart from other action stars. He pokes fun at the idea of traditional Hollywood masculinity—something he very much plays into in his films—in his television appearances. When he dresses up as a deer or plays an ’80s workout guru on The Tonight Show, on the surface the joke seems to be that he’s this super intense athlete in drag. I mean, isn’t it hilarious that he’s a muscular deer or in a neon tank top squeezing a ThighCruncher? (It is, don’t get me wrong.) But I think it’s the other way around. Johnson’s wink at the camera and deadpan seriousness in parodying his genre suggests that the idea of a monolithic action hero is, well, silly.

The contemporary action star can play against type, can be a man, a woman, or be without gender. They can, and should, make fun of the action genre and its tropes—the muscles, the violence, the phallic weapons. Dwayne “The Rock” Johnson knows it’s all over the top, but he’s enjoying the ride.

"Woman, I AM the calvary". Way too much fun playing the character of HOBBS. #OverTheTop #WithAWink #Furious7 pic.twitter.com/biUqyOD3pL

Johnson comes back from his “Shake It Off” performance with a rendition of the Bee Gees’ “Staying Alive,” this time dressed in a full white leisure suit, channeling his inner ’70s Travolta.

After the performance LL Cool J officiates. “Is the winner Jimmy Fallon?” the audience erupts in cheers, casting their vote for Fallon. LL continues, “Or is the winner Dwayne Johnson?” The cheers are louder and longer. Dwayne Johnson beat Jimmy Fallon at his own game, earning himself a gold belt, much like he’d win in a WWE match.

As he graciously accepts the belt, it becomes clear that this will be yet another great year for Dwayne “The Rock” Johnson, America’s action hero.