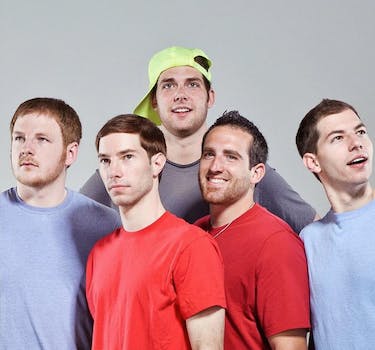 Sometimes the most extraordinary thing can come from an activity that’s actually quite ordinary. In the case of Dude Perfect, a group of time-wasting college kids found a way to the make the stupid look super.

“It was just something that happened by accident,” Coby Cotton, one of two Dude Perfect members handling operations full-time, told the Daily Dot. “We’d do stuff like this every week.”

From their backyard in 2009, five Texas A&M seniors—Cotton, his brother Cory, Cody Jones, Tyler Toney, and Garrett Hilbert—spent an afternoon bouncing basketballs off buildings and backboards.

By the end of the day, they’d created a 3:22 video that had fraternity brothers around the country wondering “Why didn’t I do that?”

The video took off. Within two days, ABC came calling. They wanted to feature the segment on Good Morning America. The crew on the air debated whether what they were watching was real or fake. At one point, Diane Sawyer called a shot off their roof “mouth watering.”

You could say everybody gets their 15 minutes of fame, but the Dude Perfect dudes figured they were onto something. ABC air time for a clip of some trick shots shot in their own backyard? That’s national exposure for a quintessentially standard Saturday.

The Dudes decided they’d make more videos. They’d send a camera out to a family ranch and another to the Sky Ranch camp in northeast Texas. They’d set up basketball hoops on flatbed trucks and others on floating docks in the middle of lakes. They’d ride on the back of said flatbeds and shoot hoops at stationary hoops set up 50 feet off road. They’d lie back-down on giant lake-game floats and wait until they’re airborne before they’d shoot.

They’d try any scenario they could conceive in search of the perfect shot, and then they found it: September 2009 at Texas A&M’s Kyle Field football stadium, in a shot they boldly dubbed the “World’s Longest Basketball Shot.”

“YouTubers always need some type of ‘Go Big’ moment,” Cotton said. “For us, that was when we did the ‘World’s Longest Basketball Shot’ out there on the football field. That got picked up all over and made it onto the front page of Yahoo!, and we got two million views in two hours.

“That was an an exciting thing for us, and it put our story on a global scale. We were on the local news in Spain and Israel, everywhere.”

Soon celebrities and national brands started came calling. First, it was Sacramento Kings point guard Tyreke Evans: He wanted help on his Rookie of the Year campaign. Then it was GMC, which rolled into this shot that Dude Perfect made from the roof of a high rise. Then it was SpikeTV.

The Dudes got called on to Jimmy Kimmel Live!, Fox and Friends, ESPN’s First Take, and the CBS Evening News. They re-set the record for world’s longest basketball shot (this time at Houston’s Reliant Stadium), and hooked up with Southwest Airlines to help promote the company’s Rapid Rewards program. In that time, their Dude Perfect YouTube channel—still holding the amateur title of “Cory Cotton”—grew to more than 282,000 subscribers and 85 million views.

“We learned pretty quickly on YouTube that the community is very protective of their audience,” Cotton said. “If they have a creator that they really like to follow, they don’t want that creator to ‘sell out.’ That’s what they’re scared of. We figured out that if we could align ourselves with brands that helped us accomplish something very awesome, our community would be supportive of that.”

Cotton said he can point to a number of examples in the group’s repertoire that show that type of awesome-inducing brand alignment, though none works so well as The Airplane Shot, when the group used their connection with GMC to shoot a basketball from inside the cabin of a moving airplane.

“Brands are trying to find a unique way to get their story out there,” Cotton said. “Goodyear makes tires, so they need some help getting a personality out there. We’ve been able to lend our fun style to these brands.

“At the same time, people on YouTube realized that Dude Perfect wouldn’t have been able to use the airplane if we hadn’t lined up with a big brand to pull it off. As long as we’re aligned with the brand from a value standpoint, we’ve got a great reason to work with them.”

Team Dude Perfect will also align itself with brands if it sees that the company in question has a mutual affinity for the values the five Dudes were brought up believing. Each member of the troupe is an avid, practicing Christian, and as Cotton attests, they’re firmly committed to finding ways in which they can reinforce that commitment through their work:

“We’re five guys who want to glorify Jesus with all that we do. We’ve all been fortunate enough to grow up with families that help teach us about faith and what we believe. That’s been essential to us throughout this whole process. We don’t have an underlying goal of converting people, but we do know that we have a platform that’s been a gift to us. We want to use that in a way that’s honoring God.

“We do our best to let people know. We always tell people that we won’t tell them what to believe, but we have no problem letting them know what we believe.”

To that point, the group has made efforts to expand their brand work beyond entertainment and truck companies and into humanitarian organizations. Cotton referenced he and his brother’s December trip to Africa as a major turning point in their commitment to others. Since returning, the group has aligned with two organizations—charity: water and Compassion International—that Cotton feels will do more good than just serving as an entertainment source.

“We have this platform, and we’re always thinking of the best ways to use it. Going to Africa, we got to see all this stuff first-hand: the clean water crisis and the poverty. We’d never seen that thing up close until we took that trip.”

The change in branding comes at a time when Dude Perfect has begun thinking more about their future. You can only shoot so many basketballs through so many moving nets before the people start to wonder what else is on, and Dude Perfect has certainly stretched the boundaries when it comes to shooting hoops.

Cotton said the group plans to roll out more competition-oriented videos in the coming months, like their dodgeball game with fellow YouTube celebrities and volleyball trick competition with Olympian Morgan Beck.

“It’s like when an athlete gets asked when their bodies are going to give out and they’ll have to stop. They’re never excited about it, but they know that it’ll eventually happen.”