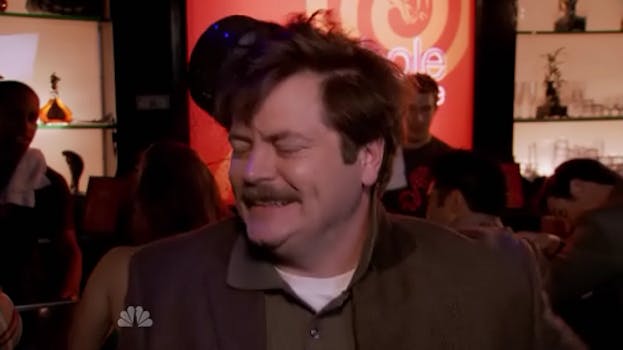 How long will you watch drunk Ron Swanson dance?

Meet the 19-year-old creator of the Parks and Recreation-inspired site that has everyone dancing along with Ron Swanson.

If every single visitor to Drunk Ron Swanson watched at least one second worth of the Parks and Recreation character dancing his drunk ass off, that means Ron Swanson has been cutting a rug at least 92 hours.

The site, which was created Sunday night, has received more than 350,000 visitors.

Drunk Ron Swanson was created by 19-year-old Web developer Simon Fletcher, an Englishman  who runs Baked Code with his friends in San Francisco. Sunday night Fletcher was bored so he decided to look for funny Parks and Recreation YouTube videos to watch. He stumbled across a clip of Swanson dancing in an episode called “The Fight,” delirious on a new drink called Snake Juice.

“[S]urprised to find that a site like Drunk Ron Swanson didn’t already exist,” he purchased the domain, sunk two hours worth of HTML coding into it, and put it up for the world to see.

About 11 hours ago, Parks and Recreation star Aziz Ansari found the site and tweeted it to his 1.5 million followers. The spike in traffic proved too much for the site, Fletcher said.

“I didn’t really prep it to receive thousands of hits every few seconds. It managed fine with around 200,000 hits prior to his tweet, but the explosion of hits we received once when Aziz tweeted it just proved too much,” Fletcher told the Daily Dot. “The site didn’t really completely crash, the server just had a high load and so was returning a lot of 500 errors to visitors rather than displaying the actual site.”

Since then, the site has been chugging along smoothly but Fletcher knows that NBC, who owns Parks and Recreation, could be lurking around any corner.

“If NBC aren’t happy with the site and want it taken down despite it promoting one of their shows, then that’s their choice,” Fletcher said. “The clip itself of Ron dancing (unlooped) has been on YouTube for almost a year now, so let’s hope this site stays the same way.”

Over the last 24 hours, more than 1,500 people have tweeted about the site, according to statistics from Topsy, a social media search engine. Fletcher is thrilled about the attention the site has received but not surprised at all.