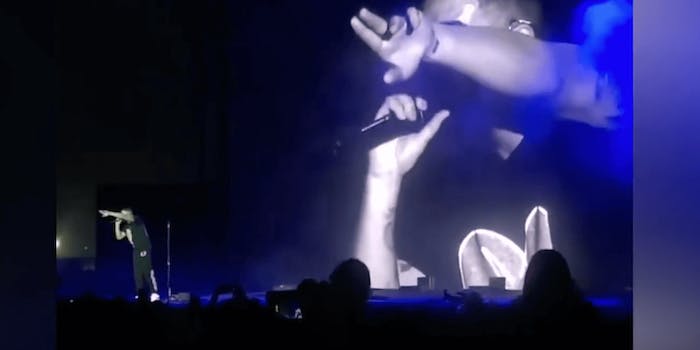 Looks like Tyler, the Creator got caught in a little bait-and-switch.

Drake got a warm pop when he was introduced by rapper/festival owner Tyler the Creator as Camp Flog Gnaw’s surprise headliner over the weekend. However, there were also persistent rumors circulating that R&B crooner Frank Ocean would make an appearance. Given the time, it was obvious Drake was the final act and that Ocean wouldn’t be coming out, and so fans turned impatient and appeared to boo him offstage.

The Toronto superstar played “Wu-Tang Forever,” then said he would proceed if the crowd wanted.

Soon after a hailstorm of “We want Frank” chants followed. Other segments of the crowd droned with a vocal “No!” in unison. Drake obliged the crowd and left, effectively booed off the stage.

“It’s been love, I love y’all,” he said graciously, before leaving. “I go by the name of Drake. Thank y’all for having me.”

Curated by Tyler the Creator, the 7-year-old event took place at Dodger Stadium in Los Angeles on Saturday and Sunday. Given he’s clearly a Drake fan, Tyler fully enjoyed himself. An appearance by Ocean would’ve made more sense than Drake, perhaps, given the secrecy and his history with Tyler in the Odd Future gang.

Lol imagine booing Drake off stage and then finding out he was the last act? pic.twitter.com/dby9NhtnRl

Me after seeing an actual crowd of people boo Drake off the stage… pic.twitter.com/zAwoYlYOYj

Me after seeing these people booing Drake off the stage at #campfloggnaw2019 because he wasn't Frank ocean pic.twitter.com/Wq7R24r2w3

It appears the reality of the situation is much more convoluted than initially thought, thanks in no small part to Tyler and unknowingly Drake himself. An attendee going by boon24 on Reddit broke down the situation and properly assigned context and blame.

“In the beginning Tyler mentioned he wanted to just party and bring out some of his friends. That’s cool, some thought it might be an OF reunion or something else but either way people were excited. Eventually ASAP rocky comes out and people are getting hyped after his couple songs until he eventually goes back.

Then Tyler asks the crowd “can I bring out one more guest!!”. The crowd goes wild (maybe it’s frank we thought), uzi comes out everyone is still hyped and he puts on a crazy performance.

Uzi eventually goes back and Tyler comes out to talk again. He asks the crowd once again “ Can I bring another guest out” now this is a pivotable point to understand. Tyler DID NOT say “ Can I bring one final guest” (aka the alleged fucking headliner) he heavily hints more people were coming out with that statement.

so drake comes and does his thing the crowd fucking loves it even though the possibility of frank is becoming dimmer and dimmer. He mentions that “he was told to only do a couple songs for us.” Okay our hopes are up once again at a possible frank. He asks the crowd “Do y’all want me to perform more” we say yes and he raps a couple more songs. The issue is he keeps insisting that him continuing to perform is up to us and he makes it clear he’s not supposed to perform anymore. He and Tyler give heavy hints that more people are to come. So once drake again asks for the 4th time if we want him to keep going, 30-40% of the crowd says “nooo”. Nobody booed, nobody kicked him out. Understand that uzi and rocky only performed 2 songs. We were under the expectation that every artist was only given two songs allowed to perform as their would be a feast of artists coming out or very possibly frank. Drake wasn’t fully communicated or sold to us as the headliner and 99% of us would be very happy with the biggest pop artist in the world performing for us, if we didn’t think there was more to come. We simply were given false manufactured hope by Tyler and drake. This wasn’t the crowds fault , this was Tylers.”

Maybe, but it seems like everyone in attendance took an L on Sunday night.