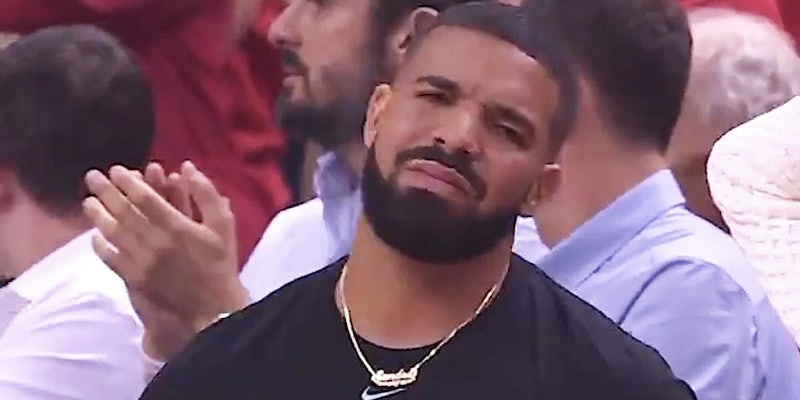 Upset Drake has become the perfect meme for faking disappointment

When you know you didn't *really* want to go to that baby shower...

Drake has been a constant courtside presence during the NBA finals over the past couple of weeks between the Golden State Warriors and Toronto Raptors, and he has unsurprisingly once again become a meme. First of all, his perseverance seemed to pay off, as the Canadian singer-songwriter celebrated the Raptors becoming champions after clinching Game 6 in the best-of-seven playoff on Thursday night.

But despite the fact that Drake is like, a really huge Raptors fan, he was right there with everyone else when Golden State Warriors small forward Kevin Durant suffered a gruesome injury this week, rupturing his Achilles tendon during Game 5 on Monday. His expression was caught for posterity and later went viral as Durant was subsequently escorted off of the court

Drake got emotional as he watched Kevin Durant leave the court with an Achilles injury. #NBAFinals pic.twitter.com/6DvWkvYy6p

Drake later took to Instagram to pen a tribute to Durant.

“Was tough for any of us to even enjoy that game tonight after seeing this transpire,” he wrote. “Praying for our brother. That’s my only concern tonight is your well being. ‘The game needs me’ is an understatement when it comes to 35. Please wish the best for this true warrior.”

Yet, Drake’s apparent sincerity notwithstanding, some people are questioning whether or not his initial reaction may have involved a few crocodile tears—as the “God’s Plan” singer is notorious for trash-talking and joking around with Durant when he comes to games.

Although the Warriors did go on to win Monday’s game, it could be argued that Durant’s injury ultimately cost them the championship. To that point, Drake’s expression has since become a meme for when you need to pretend to be shocked or disappointed when that very clearly is not the case, as you can see from some of the examples below.

When your wife says she doesn't feel like going to that baby shower she RSVP'd yall for anymore pic.twitter.com/GMlHlzieX3

When your niece is explaining something tragic that happened to one of her dolls pic.twitter.com/MCbTCw931l

Me coming to work late, acting like im mad at the trains when I actually sat at the edge of my bed until all my time was up pic.twitter.com/sExGgu2Moo

A few people are also using the meme in earnest.

When your mom hands you the phone to talk to a relative. pic.twitter.com/DTdViDlMR2

When you’re excited for the summer…

…then realize that your kids are going to be home all day.

To be fair, “there’s food at home” is absolutely a valid reason for a Drake-style meltdown. Nobody wants leftovers!