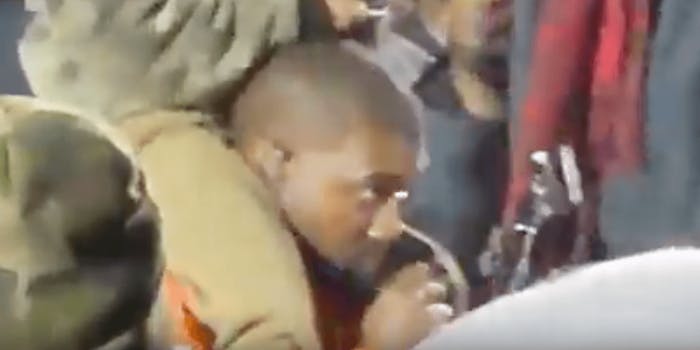 West and his choir performed Friday night at the annual 'Brunchella' fundraising event at Bethany Church.

West and his choir performed in Baton Rouge Friday night at the annual “Brunchella” fundraising event at Bethany Church. He drew thousands with his unique Christian-based doctrine centered on praise worship, with songs from his new album, Jesus Is King. Service-goers spent $55 for a Styrofoam plate of toaster pancakes, bacon, grits, and sausage. (The church service was free.)

But several attendees compared to the food to the infamous Fyre Fest meals, the ill-fated 2017 influencer festival that became infamous for its poor planning and viral antics. Further complicating matters was fans’ frustration over West’s late arrival to an event scheduled for 6pm local time. The service didn’t start until well after 8pm.

One agitated service-goer wrote: “This is the wonderful & COLD brunch BUFFET we are being served by [Boil And Roux Southern Kitchen]. & the server looked at me crazy when I asked for another pancake. […] Edit: I opted out of a small scoop of cold grits.”

Y’all dropped 55 dollars or brunch at a Kanye Sunday service and this man gave you two strips of Oscar Mayer bacon and a hard biscuit. And you’re surprised?? And mad??

At least one woman demanded her money back, posting a photo of her sad-looking Styrofoam breakfast plate to Facebook. However, it appears the catering issue wasn’t necessarily on West’s shoulders. A source told TMZ that West was not paid for his performance, and also covered his own travel expenses. Perhaps concert attendees shouldn’t have been surprised.

Kanye had nothing to do with the brunch. that’s on the promoter/organizer. Adrian Hammond of Affiliate Nation. he set the prices and seemingly deliberately withheld details about what the event was and what it was we were paying for

The Advocate (Baton Rouge) previously reported that Adrian Hammond, a restauranteur, served as the show promoter through his promotion company, Affiliate Nation. Digging deeper, Greater Baton Rouge Business Report wrote that Hammond was sentenced to a year and one day in federal prison in 2018 by the United States Attorney’s Office for the Middle District of Louisiana. Initially charged in 2013, the crimes were described as an “elaborate scheme to cover up bank fraud, money laundering and obstruction of Internal Revenue Service laws.”