The music at Apple keynote presentations are usually very dad-centric—think U2, the Foo Fighters, and Tim Cook’s favorite band, One Republic. But Apple had its new music service to announce today, and it needed to counterbalance the relative lameness of the presentation’s front end:

So of course, Apple brought out Drake to talk about Apple Connect, its new service for artists to connect with their fans, and the state of the music industry today.

Biggest moment yet. Also most nerve racking moment yet. So happy to be part of this movement #WWDC #AppleMusic #Connect #TrussMiDaddy

Shortly after the event was over, Drake called his appearance his “biggest moment yet” before quickly clarifying that it was his “most nerve racking moment yet.” For a man that has played huge, sold-out arena shows and hosted Saturday Night Live, it’s curious that this would feel so big to him, but it might have to with the reported $19 million that Apple has agreed to pay him to essentially be a brand ambassador for Connect and Apple Music.

In classic Drake fashion, he rocked a vintage Apple varsity jacket to the conference, which he told the crowd that he got it “on the Internet.” Fashion blogs immediately began to speculate where the jacket had come from. Complex Style managed to reach an eBay seller who successfully auctioned off a jacket which looks identical to the one Drake wore today for $825.

The seller, named Jake, told Complex that he was surprised to see Drake in the jacket and was pretty sure it was the same one. The jacket was apparently given to Apple employees in the ’90s as a gift. He added that he has one more of the jackets to sell that is currently unlisted.

For those looking to snatch up a similar look, eBay has some options, including this jacket that’s currently going for $499: 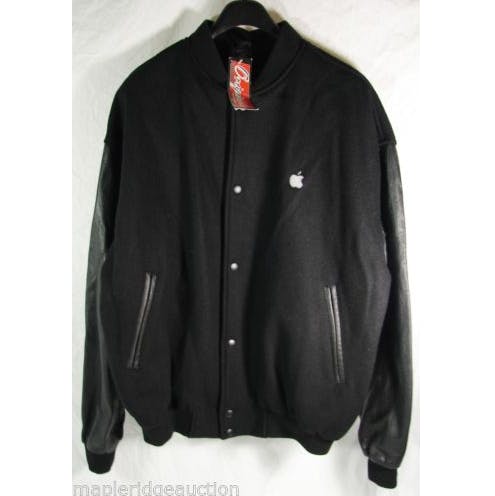 Curiously, the account where Drake’s jacket was from and another account that has several Apple jackets for sale (including the one above) are both based in Drake’s home country of Canada. Are puffy varsity jackets with Apple branding from the ’90s the new Canadian tuxedo?