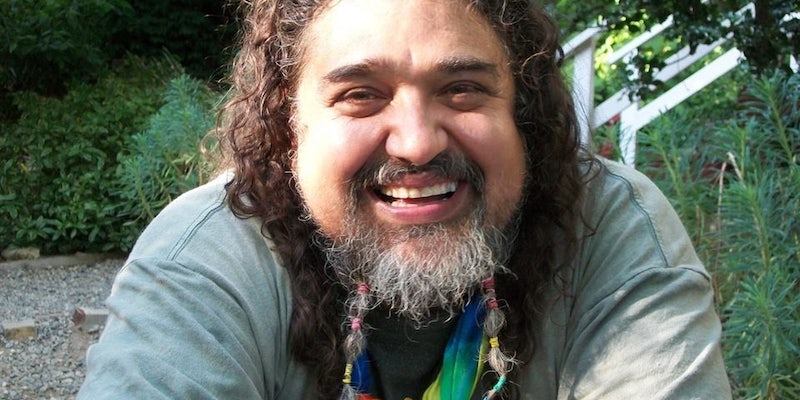 Paul “Bear” Vasquez spends his days on a personal vision quest—filmed for all the world to see.

It’s Tuesday morning, but Paul “Bear” Vasquez doesn’t realize that until I reach him on the phone.

“Oh, it is, isn’t it?” the Yosemite farmer, best known as Double Rainbow Guy, says from his home in California. Then he laughs. “Looks like I forgot to remember.”

It’s been a busy week for Vasquez. The 49-year-old father has been out in the park for days, hiking and exploring with a volunteer worker who’s come to Vasquez’s farm from England. The two recorded most of the adventure, every rainbow and every waterfall, and he’s going to edit all down into a video he’ll post on his YouTube channel, Hungrybear9562, which has over 41,000 subscribers.

Vasquez posts anywhere from two to eight videos a day, from locations like his spa, his farm and the Mariposa County Fairgrounds. A couple hundred people tune in to each clip, though it’s nothing like the Double Rainbow shot. That video brought Vasquez’s channel 34.5 million views. He’ll never have another one like that again.

When he’s done editing, Vasquez plans to head out to check up on his crops. He has about 25 fruit trees and “tons of vegetable gardens,” plus a kennel of dogs that he breeds for cash. He says he makes “about a couple thousand dollars each year.”

“It’s a showcase for my videos,” he says after running through the inventory, “that I can grow my own food to eat. I have chickens, too. I use them for eggs.”

Vasquez would like to fit in some time for a trip to the spa at the end of the day. He’s headed to ComicCon in the morning—his second trip to Southern California in two weeks, after an appearance at VidCon in Anaheim—and he needs to get all his swag in gear before he ships out on the seven-hour trip.

“That’s why I got into videos in the first place: so that I could document my life, because I felt that it was too amazing to let it go by without recording it. It’s proof. It’s proof of the things that I say. I hear myself talking, and it doesn’t sound believable. If anyone ever questions me, I’ll send them a link. Because I have proof.”

The practice came in handy two-and-a-half years ago when, while sitting at his desk, Vasquez noticed a rush of sunlight into his house and looked out the window to see what it was.

What he saw, if you’re one of the 18 or 20 people on the planet who hasn’t yet watched the video, was a fully stretched double rainbow—two rainbows stacked atop each other that stretched from one side of Yosemite’s canyon to the other. The video is 3:30 long and finds Vasquez so swept up with emotion that the first people who saw it absolutely swore that Vasquez was on drugs.

What it meant started coming to him in June 2010, after his first full days of interviews.

“I started hearing things coming out of my voice, and I had to start learning and understanding what it all meant,” he said.

“I’m here to give a message to humanity. That’s what this whole thing is. I was writing an email saying that I felt like Noah when that burst of sunshine came. I have my own well and fruit trees and all these animals. It’s kind of like an arc, a little self-sustaining arc. Right as I finished writing that email, my house fills with color. It was miles across, and it looked like a giant eyeball to me.

“What you don’t see, what most people don’t realize is: you know how the video starts and there’s a tree in front of the rainbow? When I clear that tree and I’m in the full power of it, it felt like a giant hand pushed me to the ground, and then I start to cry, because I was touched by God. And he was saying, ‘You can’t stand here. You’ve got to sit down in my presence.'”

Since, Vasquez has abided by three simple rules: “Love your fellow man, walk gently on Mother Earth, and spend every day connecting to your spirit.”

Vasquez has lived explicitly by those tenants since his “Yosemite Mountain Giant Double Rainbow” went big in June 2010, but that affinity for nature and the wildlife has been brewing in him since he was a boy. Raised in East Los Angeles, he moved to Yosemite in 1985 at the age of 22, got an EMT job, and “bought this undeveloped chunk of land.”

He started farming right away, immersing himself in Yosemite Native American culture and ritual. He met a girl, got married, and considered her his “anchor for sticking around.” City life was old news to him.

“Who does that?” he asks rhetorically. “I do. Because I am a different kind of thinker. I use my imagination and I follow through with it. And I’m fearless.”

Vasquez’s marriage broke off after three years, but not before they’d had two kids. They’re 23 and 25 now, and both work in the park. Sometimes, like at VidCon last month, they accompany him on tours. When he’s lucky, they’ll accompany him on stage.

“That’s the achievement I’m most proud of in my life,” Vasquez says. “My relationship with my children and how great they’ve grown.”

He says that his days aren’t much different from the way they were before “Double Rainbow” broke—and in fact, those days weren’t so different from the ones in 1996. He farms, he breeds his dogs, and he hits the spa if he’s got time before he starts to cook his dinner.

But there’s one thing that’s different, one thing that rings to the tune of 41,000 subscribers on YouTube. Only a couple hundred watch, but everyone sees his name—and everyone knows about him. That’s the difference. He says it’s not tangible. It’s really just a feeling.

“When I shot the Double Rainbow video, nobody watched any of my videos,” he says. “I was alone. When you have that in you, it’s just you and your camera. That’s gone. I’ll never get that back again. I know that whenever I shoot videos now, somebody will watch it.

“When I shot the Double Rainbow video, it was just for me. It was just a personal, private moment here. One shot with no one in it. It’s a unique place.”