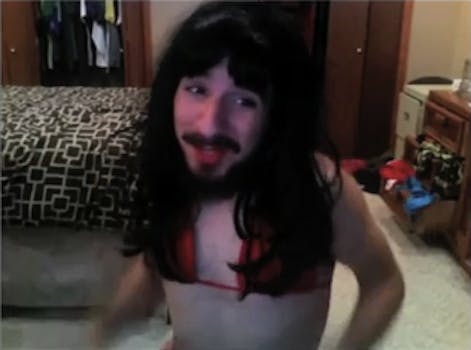 Trying to grasp the gray area of personal security between Chatroulette and Trapwire.

Perhaps my favorite thing on the Internet this week was a YouTube video featuring a guy with a fairly significant Van Dyke wearing a dress and lip-syncing “Call Me Maybe.”

The lip-syncing isn’t especially good. The costume is ridiculous but not especially well done. The dance is unplanned and not particularly skilled.

What makes the video great is that it’s a montage of Chatroulette sessions. For those of you somehow unfamiliar with the Internet institution that is Chatroulette, it’s pretty simple: It’s just like any other video chat service, except you don’t get to pick the person you chat with. It randomly puts you in a room with someone else. And yes, as I understand it (and this video supports it), the most popular use of Chatroulette is exactly what you think it is.

You may never be bored enough to try Chatroulette yourself (unless, of course, you’re a college student), but watching this video is surely better than the real thing.

When you watch the video, you really barely even glance at the star. You watch the range of reactions on people’s faces as they enter the randomly chosen chat room only to discover a hairy guy in a bikini lip-syncing to Carly Rae Jepsen. Whatever they were expecting, it sure wasn’t this.

Many viewers are solitary 20-something males in darkened rooms, usually without a whole lot of clothes on. We can only guess what brings them to Chatroulette. Quite a few are small groups or couples, presumably looking for a goofy lark to pass the time.

After a moment of sheer shock (and it takes a lot to surprise someone using Chatroulette, one presumes), their faces usually break out in an expression of pure joy. They laugh. Many start singing along—and apparently EVERYONE knows the words to that song.

Over the weekend, rumors flew around the Internet that big brother was really and truly here. Twitter and other social networking sites erupted with concerns over a security and intelligence contractor called TrapWire.

It all began with a bunch of emails, leaked to WikiLeaks from the anonymous hacking of a private security firm called Stratfor. The emails revealed a strategic business relationship between the two intelligence firms in which they would refer each other business and share commissions.

The thing is, the company is not secret. Its relationships are public. Its technology is patented. It was founded six years ago. It takes data that others—public and private—were already recording and simply puts it together.

It’s easy to dismiss the kerfuffle over TrapWire as more of the Internet being crazy. But it’s far more than that. It is a reaction to the fact that we, as a society, have no idea what to do about how to strike the right balance between privacy and how it affects both freedom and safety.

Think of what we put out there on the Internet. Go back and watch the Chatroulette video, there are a lot of people committing a frequently stigmatized act that was previously restricted for bedrooms and bathrooms with lockable doors. Now, because it’s on the Internet, a digital medium, there is a full record of it—for all eternity. That once very private act is now in some sense a public one.

We share amazingly personal stories—of illness, of hope, of acceptance online. People are posting ill-advised commentary and emotional threats on their Facebook walls and getting arrested for it. A district court judge just ruled that your friends can share any “private” Facebook communication they please with law enforcement.

And the “real world” is quickly becoming more Internet-like. That’s what companies like TrapWire are all about. And that can be a good thing, when injustices are brought to light, for example.

And there are real threats, online and off-. Some businesses are built on using others’ intellectual property, and creators can’t pay their bills as a result. Brands get hijacked and pranked. Millions are made off of popular phenomena that may or may not be real. Children get propositioned online, which can be a haven for sexual predators whatever the legal system says. Women who share helpful information or just their own, unvarnished opinions get death threats. Cyberbullying contributes to suicide.

Beyond personal security, there’s the bigger issue of general security. After recent mass shootings, we cannot argue that security is not a legitimate concern for society. And, lest we forget, it was the failure of the so-called intelligence community to put information from the wide range of possible sources together that was seen as one of the primary causes for the United States’s failure to prevent 9/11.

How do we balance all of this? It’s a thorny question that we have only begun to address, but one  that goes to the very foundations of our social contract. And one that we have just had to face in the last two decades. Most of the broad strokes of our social system were drawn up over a two-century period culminating in the formation of the federal government of the United States. To a degree, everything that has come since has been a series of footnotes. But John Locke and Thomas Jefferson had no CCTV and no Internet, so privacy was just not a major issue for them. It is now, and it’s something we’re going to have to figure out without their help.

The Constitution is missing a page. It’s up to us to write it.