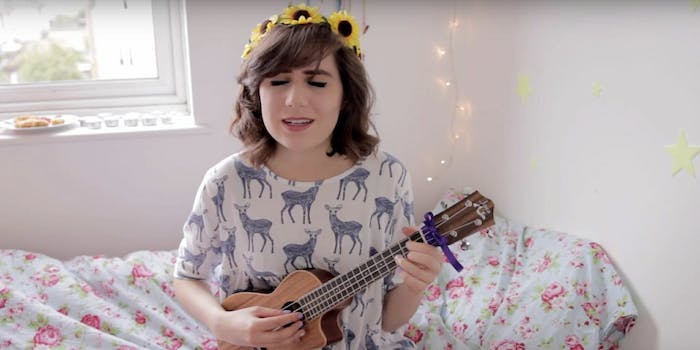 Dodie Clark is the complete package of cuteness.

Between her love for flower crowns, her talented ukulele covers, and her ability to rock the perfect pair of overalls, she’s 100 percent adorable. But beyond that cute foundation, Clark is also talented, spunky, self-aware, hilarious, and sarcastic as well.

Since she joined YouTube in 2011, Clark has become best known for her covers, original songs, and candid vlogs discussing everything from boys and relationships to advice on ways to stay creative. Though her most popular videos are her original tracks “She” and “Adored by Him,” the videos I think best depict her musical talent—and ability to convince any YouTuber to perform—are “FourFiveSeconds” featuring Jack Howard and “A Song About Acne” with Charlieissocoollike. In the past year, Clark has toured the U.K. with fellow YouTube musicians Bry and Bethan Leadley (MusicalBethan) and is currently working on her first EP.

With a steady growth in both subscribers and reputation in the U.K. vlogging community, Clark is one of the most well-connected creators on the platform. Her long list of collabs includes Jack Howard, Daniel J. Layton, MeowItsLucy, Hannah Witton, Evan Edinger, Bry, Jon Cozart, Hazel Hayes, and more. But it’s her friendships with Witton and MeowItsLucy, along with other brilliant women in the community, that continue to give me #squadgoals (and I don’t ever say things like #squadgoals).

What sets Dodie apart is her candid and authentic nature; it penetrates the screen and allows her to make very real connections with her fans. To me, her personality is a mix of Liz Lemon from 30 Rock and Bee from Bee and Puppycat, and between that and her musical talent, she’s easily one of the most worthwhile YouTube creators to follow on the platform right now.