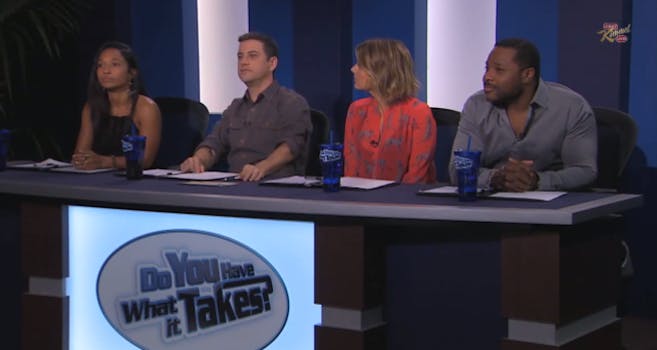 Jimmy Kimmel’s ‘Do You Have What It Takes?’ is the talent show we need

How desperate are people to make it in Hollywood? Still very desperate, apparently.

Master troll Jimmy Kimmel recently placed an ad on Craigslist for a show called Do You Have What It Takes?, mimicking the look and feel of shows like So You Think You Can Dance. The ad simply asked for people interested in “reality auditions,” with no other info. And people showed up anyway.

The judges—Chilli from TLC, The Cosby Show’s Malcolm-Jamal Warner, Bachelorette star Ali Fedotowsky, and Kimmel—then proceeded to vet the candidates by essentially repeating, “Do you have what it takes?” as the contestants question their existence and life choices. If anything, this bit illustrates the tired phrases (“I think you have it”) delivered to contestants on shows like The Voice and American Idol.

But seriously, I’d watch a show that featured no performances, just people questioning their existence.