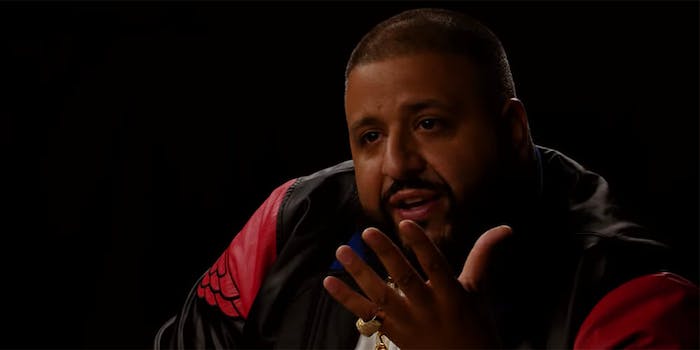 DJ Khaled plans to sue Billboard after his album fails to reach No. 1

The artist accuses Billboard of being 'unfair.'

DJ Khaled is having wild thoughts. The megastar is planning on suing the Billboard Chart after his latest album, Father of Asahd, came in at No. 2, Page Six reports.

The No. 1 spot was taken by Tyler, the Creator’s IGOR after Billboard allegedly disqualified downloads of Khaled’s album, which were originally sold in as part of a “bundle deal” with an energy drink.

Bundle deals, in which an artist offers album downloads with the purchasing of merchandise, have taken the industry by storm. They’ve also been a source of controversy, like when Nicki Minaj attacked baby Stormi Webster after Minaj’s album came second to Travis Scott’s Astroworld.

Khaled, who reportedly threw a fit at his record label after the album failed to take top spot, accused Billboard of discounted him of more than 100,000 sales.

Billboard reportedly agreed to count the downloads which came from Khaled’s bundle package but later backtracked, stating that there were “anomalies” in his figures. A source told Page Six that Billboard went against the idea that 100,000 sales were discounted but did admit that some sales were ruled out. Page Six also reports that Billboard made the decision after speaking with Khaled’s management, Sony Records and Nielsen.

A source told Page Six that “when Khaled’s team tried to appeal, Billboard refused to budge.” The source also said that the situation was even more unfair, especially because Billboard counted the sales figures from Tyler, the Creator’s bundle deal.

Billboard and DJ Khaled have yet to comment on the rumors. Billboard did announce it will revise its policies allowing bundle deals and will announce new rules for 2020.