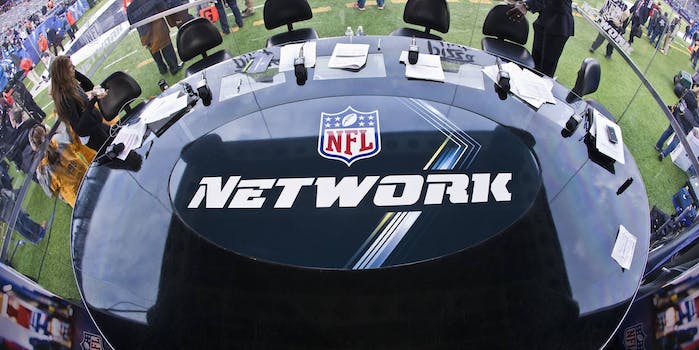 This is the first time a cable provider has dropped the NFL Network.

NFL fans who subscribe to Dish Network just lost the ability to watch as much football as they might want.

That’s because the satellite TV company dropped the NFL Network at 7pm ET on Thursday, and the NFL RedZone—which allows fans to watch any Sunday afternoon game they want on a TV, tablet, or phone—also will be discontinued. The network, though, told the Daily Dot late Thursday night that it isn’t necessarily closed to the NFL for good.

In a statement released Thursday night, the NFL noted this is the first time in the NFL Network’s 13-year history that a service provider has not continued to offer the network on its roster of channels.

“NFL content has never been more popular across the media landscape,” the NFL wrote in its statement. “According to the Nielsen Company, 199 million people tuned into the 2015 NFL regular season representing 78 percent of all television homes and 67 percent of potential viewers in the U.S. NFL games accounted for the top 25 and 46 of the 50 most-watched TV shows among all programming in 2015.”

“Our contract with NFL Network has expired,” a Dish Network spokesman told the Daily Dot in an email. “We remain open to a fair offer that allows us to carry this content at an appropriate value to our customers.”

The NFL also has set up a website iwantnflnetwork.com in which the league suggests that those NFL fans who subscribe to Dish find another provider that carries the NFL Network and RedZone, including Xfinity, Verizon, Spectrum, Time Warner Cable, and DirecTV.

“The good news,” the NFL wrote, “is there are plenty of choices.”

As Awful Announcing points out, the carriage fee for the NFL Network is $1.40 per subscriber, which might be a price Dish Network believes is too high—especially during the offseason.

The NFL, meanwhile, continues to try to find new ways to reach an audience. Last season, the league struck a deal with Yahoo to livestream the Week 7 Bills-Jaguars game, and Twitter will livestream 10 Thursday night games during the 2016 season.