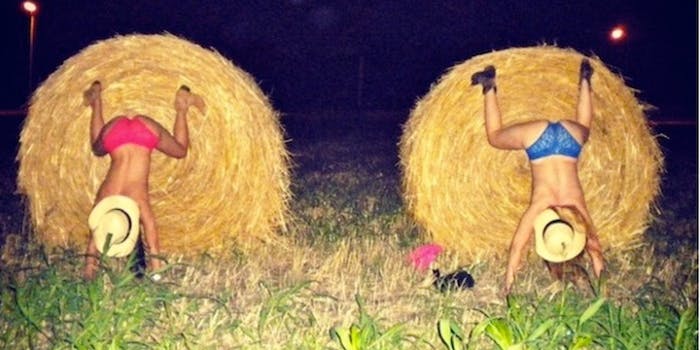 Diple knows how to start a party—even on Twitter.

Producer, Smoothie Wolf founder, and hyperactive Twitter user Diplo has a special way of interacting with his female fans: asking them for pictures of them popping their azzes—as Big Freedia would say—in a very flexible manner.

That was the idea behind Diplo’s #ExpressYourself, a Twitter-based campaign where limber ladies would tweet impressive pictures to the Major Lazer DJ of themselves balancing on their hands with their shaking butts pointed upward.

Expressing oneself comes from Diplo’s song of the same name, which was released in May and whose album cover and accompanying video feature women shaking their rump back and forth. “Spread your legs / go up and down and make it” are the only important lyrics of the song and the premise of the express yourself pose.

The hashtag racked up around 25,000 tweets, with fans submitting pictures from bizarre locations (like a nursing home) around the world. It mostly consisted of ladies, but some guys and even Scissor Sisters singer Jake Shears submitted a picture.

Diplo flooded his stream with retweets of submissions and posted a lot of the pictures to his blog.

“FREE YOUR MIND AND YOUR ASS WILL FOLLOW #expressyourself,” Diplo tweeted in one of many rallying calls.

But he couldn’t pick one winner with the bounciest badonkadonk, so he chose 15—although one person, Misha Fazeli, won the grand prize swag pack of a lifetime guestlist access to all of his shows.

Fazeli’s submission was of her and her friend expressing themselves in front of two haystacks exclaiming “God Bless Texas.” She lives in Dallas, she’s obsessed with Diplo, and judging by her tweets, Diplo won something extra, too.

LA Weekly talked with six of the runner-up winners of what kind of skill it took to capture Diplo’s attention and how much upper-body strength the pose required.

“It doesn’t take that much arm strength to hold a #ExpressYourself position at all. If you got arms, knees to bend, and legs to spread you can do it,” said @vnessav, who tweeted the picture of herself in the nursing home.