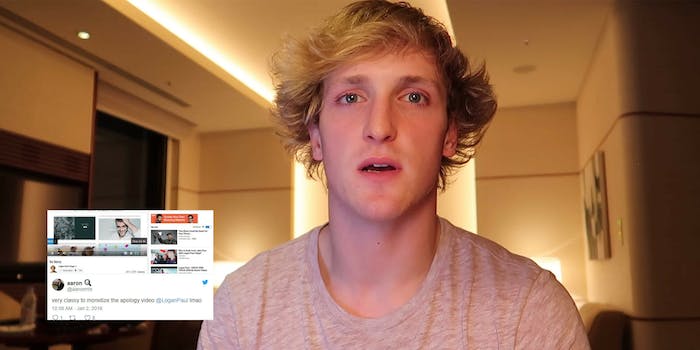 Logan Paul’s apology became the No. 1 trending YouTube video on Wednesday, with more than 17 million views. But is the social media star turning national outrage into personal gain by monetizing his apology? His detractors say yes, but the answer is more complicated.

Paul ignited criticism this month when he filmed a man who apparently died by suicide. He was in Japan on vacation and visited Aokigahara—a forest near Mt. Fuji that is known for suicides. The backlash was swift, leading Paul to delete the video and say he’s sorry on Tuesday. Paul looks into the camera, offers apologies, and tells fans that they shouldn’t defend his actions. And although Paul noted that he wasn’t monetizing the first video, it appeared that—for a time—he was monetizing his own apology.

Viewers quickly noted his heartfelt apology was accumulating advertisement revenue. For some, a pre-roll ad ran before the apology began and featured another ad in the upper right-hand corner of the video. Others noticed a yellow tick that showed up in the video’s red bar, indicating one’s place in the video. Those yellow ticks appear on monetized videos.

When you monetize your apology…not cool dude @LoganPaul #loganpaul pic.twitter.com/Ep5w5pu9cu

I noticed it when I watched it originally. He might have turned off ads since. pic.twitter.com/jjiGHRDGl3

Those features no longer appear on Paul’s video (and were reported as not showing up just hours after Paul’s video went online), though it’s less clear exactly when it happened or whether the video was purposely monetized before the ads were removed. The Daily Dot has reached out to YouTube for comment.

Though the actual amount of money YouTubers make by running ads is secret, it’s a figure largely determined by how many views videos receive. Forbes estimates Paul made about $12.5 million from YouTube videos in 2017; Yahoo Finance puts that figure at about $14 million. That leaves merchandise (available for purchase via his channel) and other social media pages. However quickly he apparently turned off the monetization option on his apology video, it’s hard to imagine 17 million views in just over 24 hours don’t positively impact Paul’s bottom line.