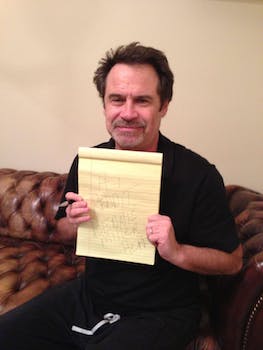 Comedian, actor, and talk-show host Dennis Miller fielded questions from redditors—and one celebrity troll—during a Jan. 22 "Ask Me Anything" on the popular social news site.

Comedian, actor, and talk-show host Dennis Miller fielded questions from redditors—and one celebrity troll—during a Jan. 22 “Ask Me Anything” on the popular social news site.

As redditors filled the session with questions about Miller’s life and career, Tim Heidecker, one half of the comedy duo known for Tim and Eric Awesome Show, Great Job!, crashed the discussion. Tagging each of his posts with the hashtag #230PST, iamTimHeidecker attempted to get a rise from his fellow comedian through questions such as “Was the inauguration a hoax? do you know?” and “Do you love?”

Redditors responded to Heidecker’s sabotage, which was announced on his official Twitter feed, with downvotes and negative comments.

“You’re fat and annoying. Your show sucks and you are not funny,” redditor thisneedstobeupvoted wrote in response to one of Heidecker’s questions.

Miller himself addressed Heidecker only once, answering his question “did you ever have red hair?” with, simply, “Where?”

Redditors also turned their ire toward r/IAmA moderators. In a thread posted to r/subredditdrama, redditor GreatestDenier proclaimed “Tim Heidecker and his drones sabotage Dennis Miller’s AMA, IamA mods do absolutely nothing to stop it.” The issue was addressed in the thread by r/IAMA moderator puredemo.

“In general, we don’t moderate /r/IAmA comments unless they are threatening or spam. That’s important so users can ask blunt, potentially insulting questions to the OP when needed,” puredemo explained. “Some AMAs are going to be contentious, and that’s alright.”

Heidecker’s comments were eventually deleted from the AMA itself but are still visible on his Reddit account overview. The deletion, according to puredemo, stemmed from the questions’ constant usage of the #230PST hashtag and its link to a podcast. As a result, it was considered spam. The comedian has since apologized to Miller on Twitter.

Miller didn’t let Heidecker’s trolling attempts get to him. During the remainder of the AMA, he revealed insights about his career through comedy, politics, and sports to interested redditors.

What can a comedian do to make themselves easy to work with? What makes people say, “I want to work with him again.”? (MasterOfTheMoon)

Well to be honest, stand up comedy is pretty cut and dry. If you are funny enough, you can be a prick and if you are not funny enough, no degree of sainthood is going to save you.

How much input did you have on what jokes you told when you were host of the Weekend Update? Was it mostly you or writers? Also, and I know that is always asked, but what (or who) inspired you to be a comedian? (thebigdombowsky)

For the first 3 shows at Saturday Night Live, I had no say. I wrote some jokes, but since I was a newbie, Senator Al Franken, who was my boss, picked the jokes. But then, around 3 shows in, they had a whole bunch of leaks in the dyke and they left me alone out of necessity. I would say for the rest of my career there. One other many, the great Herb Sargent wrote almost all of update, except of course the guest characters. All the guests wrote their own pieces. BTW, I never thought I would hear myself say Senator Al Franken out loud.

How do you feel about your time on Monday Night Football? (dudersmash)

I enjoyed my two years there, but I knew as soon as John Madden left Fox, Foutz and I were dead. Makes sense, if I am ever in LA on any given night and I want to jump up at the Improv and do standup and Madden is on stage, they better haul him off too.

Is it okay that I think of you and pool everytime I hear “Everybody Wants To Rule The World?” (Jermitts)

Not to mention a pool room scene I did in my magnum opus “Bordello of Blood”. By the way, every time I use that song, it costs $3000. I think I fed Tears for Fears for around a decade.

It’s too early to ask, but I have a prediction. I think Chris Christie will run as a democrat, be elected and a film will be made about him called “Mr. Smith and Wollensky goes to Washington”