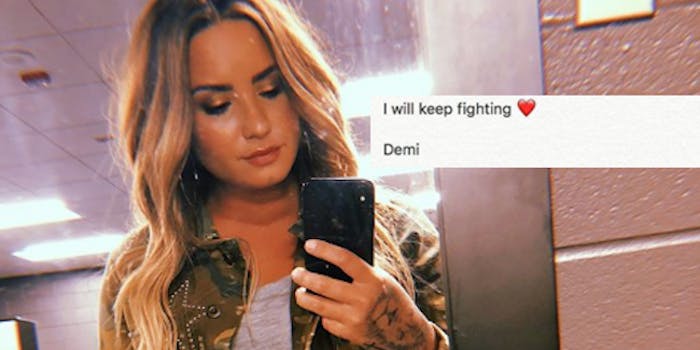 'What I’ve learned is that this illness is not something that disappears or fades with time.'

Demi Lovato has posted her first update to social media since being hospitalized for an apparent heroin overdose in late July.

In the open letter (screenshotted from the Notes app), the pop star confirmed for fans that she had in fact relapsed, and had learned a lot about addiction in the process. Lovato has been open about her struggles with the disease both in interviews and her YouTube documentary, and she just celebrated six years of sobriety in March—so the recent relapse came as a shock for the singer’s young fans.

“I have always been transparent about my journey with addiction,” she wrote Sunday evening. “What I’ve learned is that this illness is not something that disappears or fades with time. It is something I must continue to overcome and have not done yet.”

Lovato says she is dedicating the coming weeks to healing, so she can “focus on [her] sobriety and road to recovery.”

“I look forward to the day where I can say I came out on the other side,” she concluded. “I will keep fighting.”