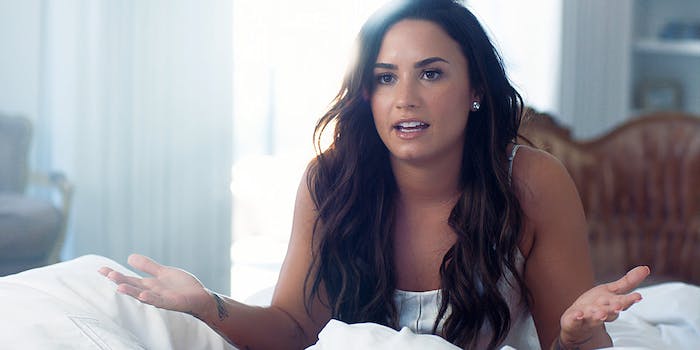 Dr. Dre’s Defiant Ones documentary was compelling and full of great music, but it was also a drum-beating ad for Apple and its Dre-adjacent investments. Demi Lovato‘s Simply Complicated, which hit YouTube sans paywall on Tuesday, is a high for the confessional rock star documentary genre.

You know it immediately: “The last time I did an interview this long I was on cocaine,” Lovato says, nervously settling in to talk. For the next hour and change, the 25-year-old singer opens up about her fights with mental health, post-Disney pop stardom, sexuality, and body image. “I’m learning how to be a voice and not a victim.”

Her father had a raging temper and substance abuse problems, she says. Every phase of her career has been an uphill battle, one often undercut by Lovato’s superficial missteps—like, say, performing hungover during American Idol.

You also catch Lovato as a perfectionist, grinding down her producer’s will with word-by-word takes. Given an easy out on the day’s workload, she pushes back: “I’ll just keep doing it.”

The YouTube format is an immediate success, too: Lovato’s doc Wednesday afternoon became the No. 4 trending video across the streaming platform.

The whole thing is a stunning surprise: These types of documentaries are built around promoting a new album and leave no dark corners. Indeed, Simply Complicated follows the process behind last month’s Tell Me You Love Me. But we mostly get an underdog’s triumph story, streaming freely and for the benefit of the singer’s young fans who will find that their hero may share some of their struggles.