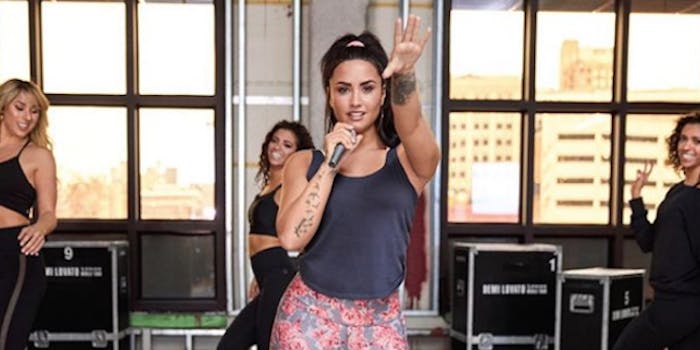 'Remember you have always been a community of Lovatics who LOVE.'

One of Demi Lovato‘s backup dancers has issued an open letter after fan speculation that she may have enabled the pop star’s drug relapse.

In a tweet late Sunday, Dani Vitale told Lovato’s fans that she “cares about Demi just like all of you do,” and asked for them to be respectful during this time of healing for the singer. Vitale has worked with Lovato for nearly 10 years, which means she’s been by the former Disney Channel star’s side both as she struggled to achieve sobriety and for her very public relapse earlier this summer. Following reports that Lovato had relapsed with cocaine and Opioid use again last week, and was found unconscious in her Hollywood Hills home and revived by a friend using Narcan, the fandom apparently started theorizing as to who might be to blame for the incident. But Vitale wasn’t having any of it.

“There is no need for any negativity towards the ones who care about Demi at this time. There is too much of it in this world as it is,” she wrote. “I know you’re all feeling lost without her at this moment in time. Remember that you have always been a community of Lovatics who LOVE. Please remember that when you take out your phones and start typing.”

Lovato is reportedly in stable condition and recovering in the hospital.