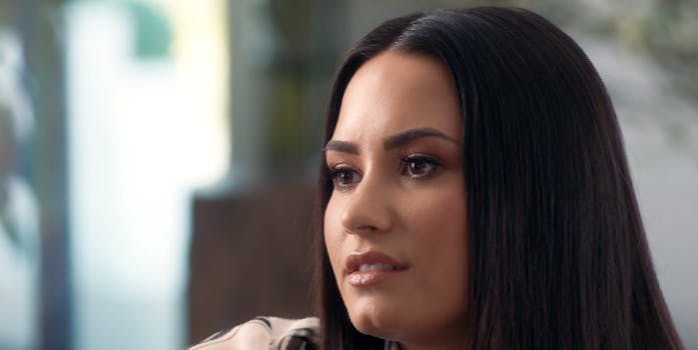 'Six years ago, I was drinking vodka out of a Sprite bottle at nine in the morning.'

Demi Lovato marked the six-year anniversary of her sobriety with a heartfelt statement to her fans and supporters on Friday night, describing how she changed her life for the better by addressing her mental health and addiction.

“Yesterday, six years ago, I was drinking vodka out of a Sprite bottle at 9 in the morning, throwing up in the car. And I just remembered thinking, ‘This is no longer cute. This is no longer fun. And I’m just like my dad,'” Lovato told the crowd at Barclays Center in Brooklyn, speaking through tears. “So I took a look at my life, and I said, ‘Something has to change, something has to change, I’ve got to get sober,’ so I did.”

“I made changes in my life, and the reason I became so open about my story is because I know that there are people here tonight that need to ask for help, and I want you to know that’s OK. Mental health is something that we all need to talk about, and we need to take the stigma away from it,” she continued, as her fans occasionally shouted words of encouragement.

“So let’s raise the awareness, let’s let everybody know it’s OK to have a mental illness, it’s OK to have an addiction problem. I’m bipolar, like, whatever! I take care of myself. And I can never say ‘Thank you’ enough to you guys for the support that you’ve given me over the years, and you’ve forgiven me for my mistakes. Thank you for being a part of saving my life. I love you guys.”

Lovato followed up the remarks with a performance of “Warrior” from her 2013 album DEMI.

This was far from the first time Lovato has spoken out publicly about her addiction and mental health history―she starred in a documentary just last year, Simply Complicated, which can be viewed on YouTube. In addition to alcohol and drug abuse, Lovato has also acknowledged suffering from depression, bipolar disorder, and an eating disorder throughout her life.