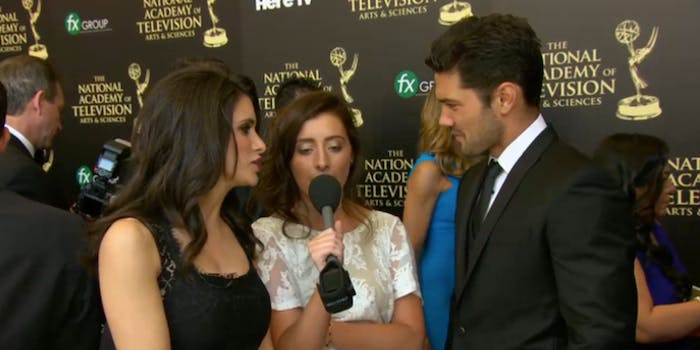 The hosts did not disguise the fact that they knew very little about the stars on the red carpet.

Last night, the Daytime Emmys Awards took place in L.A., and the show was hosted by Kathy Griffin, which already insured there would be some offensive jokes. Four popular social media “experts” were also hired to interview nominees on the red carpet: Brittany Furlan, Jessica Harlow, Lauren Elizabeth, and Meghan Rosette.

This year’s show was livestreamed instead of broadcast, which further allowed for unedited questions. The hosts did not disguise the fact that they knew very little about the soap stars on the red carpet, and instead commented mostly on their appearance.

Harlow asked Lawrence Saint-Victor from The Bold and the Beautiful what it was like “to be a black man on a soap opera these days.” Then Furlan, a popular Vine star, and Elizabeth attempted to hit on Ryan Paevey from General Hospital, with a series of bad detective/investigator come-ons. As he started to leave, Furlan said, “We’re going to get you away from us before we rape you.”

Viewers of course took to Twitter to voice their dissent:

the SECOND they made that rape joke, they should have been pulled off the carpet. Period. #DaytimeEmmys

If a male red carpet host told a hot female he wanted to rape her, he’d never work a day in his life again. #JustSayin #DaytimeEmmys

Neither Furlan nor the National Academy of Television Arts & Sciences has commented on the incident.