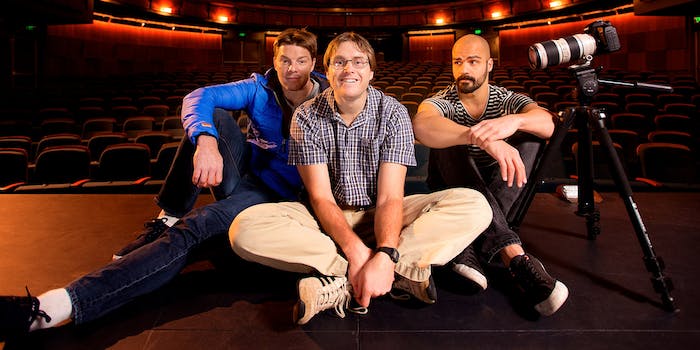 Dayne Rathbone is the funniest comedian you’ve never heard of.

Warning: The videos in this article contain explicit content that may be NSFW.

To understand the comedy of Dayne Rathbone, you have to first try and understand Dayne. He is a computer programmer. He is a man of two countries. He is, according to Australia’s oldest and foremost newspaper, an “awkward freak.” Rathbone himself  holds a more simplistic and flattering view. “I am a comedian and a South African or Australian,” he told the Daily Dot email, which we’ve left unedited. “But I dont care which country anyone is from because we are all the same and are all equal.”

Having been raised in South Africa, he moved to Canberra, Australia, with the rest of his family to follow older brother and rugby union star Clyde. The family had received death threats after Clyde played a pivotal role for the Australian national team in a win over his country of birth.

Canberra’s dullness makes it the perfect environment to develop idiosyncratic comedy such as Rathbone’s. Created as a compromise between Sydney and Melbourne, Australia’s capital often feels artificial and oddly empty—especially on weekends when civil servants leave in droves for neighboring cities. In the past this has inspired ill-conceived attempts to stoke city pride like the cringe-worthy “Feel the Power of Canberra” license plates that embarrassed motorists used to cover up with white tape.

Rathbone doesn’t remember the plates, because he only moved to Canberra in 2006, but “you are not lying because maybe they did have it before,” he said. “Canberra has montains everywhere and everyong is really nice and looks up to me so I do like it a lot except the goverment is here and I hate them for ruining everything because I like Ron Paul.”

Just like Chris (Simpsons artist), the brilliant internet caricaturist and writer, it was inevitable that as Rathbone achieved recognition through his stand-up shows, some people would question his authenticity as a performer; he’s faced accusations that his naivety and awkwardness are manufactured, merely an Andy Kaufmanesque prank. But setting aside the moot nature of this cynicism (what art isn’t performative?), Dayne’s World provides enough awkward set pieces—from Tinder dates to strange short films involving his parents and a bizarre interview with the local paper which ends in him gleefully letting off a flare—to convince viewers that if Rathbone isn’t really like this then we would kind of wish that he were.

Asked whether Dayne’s World is an accurate account of his life, Rathbone remains elusive: “YES or NO because I also do a lot of other things what arent even in the show. My favorite is reading Sam Harris and playing DotA. Plus Mike said ‘I dont know if i believe him’ but I sead why would I waist my own Aurora red hand flare!”

The series is directed and narrated by fellow comedian Mike Nayna. The two met at a comedy show and Rathbone mentioned his play Its Me Mandela, the development and production of which is central to the narrative of the webseries. According to Rathbone, he agreed to Nayna’s series proposal as “he did a famous acting course in America and plus he was already black plus the show would be really good to sell tickets so I just said ok.”

Nayna’s presence within the series—the slick, enthusiastic brashness of the professional comedian—acts as the counterpoint to Dayne’s ill-judged attempts at negotiating social cues and traditional joke-telling.

But tellingly it is Nayna who comes across as creepier, especially in his opening comments that he is taking part in a family dinner in order to meet Rathbone’s parents, his brothers, and “their hot girlfriends.”

It is an irony (sort of) not lost on Rathbone, who answers these charges with enthusiasm: “YES!!!!! lol but I didnt care because they are all my brothers girlfriends so he cant have sex in them anyway. Mike likes Anna but Clyde is reallystrong and will bash him.”

Clyde features heavily in the series, and the tolerance he shows for his brother’s behavior is touching. You can imagine that throughout most of his life, Rathbone has lived in the shadow of his older brother, but that’s no doubt changing. Clyde recently retired, while Rathbone’s career trajectory is firmly in its ascendency.

“At school everyone called me ‘Rathbones brother’ because Clyde was the School Captian and Rugby Captain which is stupid because everyong is ‘Rathbones brother’ then someone at Coles [supermarket] saw Clyde and they sead are you ‘Daynes brother’ so I sead now you know what it feels s like! But my family doesnt care becausethey love everyone the same.”