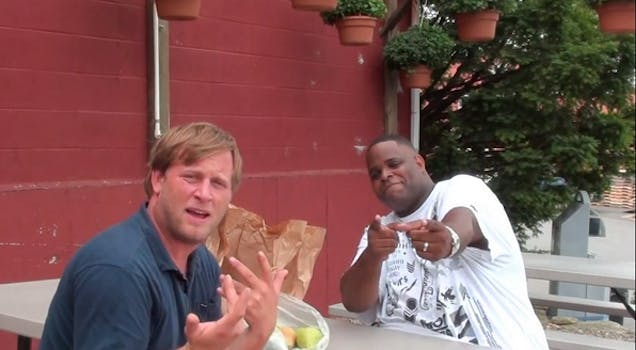 The YouTube food reviewer whose take on Five Guys Burgers and Fries made him an overnight star answers Reddit's questions in a new video.

The Daym Drops Fam Appreciation Tour continues to roll on, showing no signs of slowing down or stopping off at the drive-thru.

Today, the magnanimous YouTube food reviewer (real name Daymon Patterson) was outside of the Belltown Orchards in Glastonbury, Conn., speaking with redditor ghostbackwards for a Reddit IAmA that he posted to his YouTube channel. The two sat next to a bag of apples and spoke super officially for 23 minutes, covering the conversational gamut with everything from Patterson’s family life to his professional life to what he wants to do with his newfound fame.

Responding to questions redditors submitted to a ghostbackwards IAmA, Patterson revealed hopes that he’d soon find himself as a host on the Food Network, one of his wife’s favorite networks.

“Hopefully I can work something out in the near future,” he said in his theatrical way. “I want to focus on eating better.”

“I can go either direction, and knowing how many kids are watching my videos right now, I could stay on that track of fast food and sign with McDonald’s or Burger King, White Castle, whatever the case may be. And I could promote whatever’s not healthy. But in the back of my mind, I’ll be getting paid for causing health complications for other individuals.

“At the weight that I am now, what better way to give back and help different generations than to actually promote health? If I get on Food Network, that’s exactly what I’ll do. It’s going to be healthy foods. If I can actually travel and hit up different schools in different states, talk to the kids out there, see how they’re doing two months later.”

“I will take bits and pieces of different comedians and incorporate them into different food reviews,” he said.

Patterson, who’s married with two kids and works as a manager at a Connecticut Carmax, revealed that he’s currently on a health kick to try to lose some weight but that it shouldn’t impede on his ability to make food review videos. He’ll eat anything, he says, except for sushi.

“I don’t love sushi. I’ll eat some chinese food all day long, but me sitting in front of a sushi room? What am I going to do? Grab a tooth pick and be all set? I’m going to have a tooth pick, some bits of rice being held together by raw fish… I’m supposed to pop that in my mouth and smile afterwards? I can’t smile. It’s hard enough having to smile after eat an apple, let alone some raw sushi. It’s not happening, baby.”

Or, to steal a line from Daym himself: you bite the sushi, the sushi don’t bite right back.