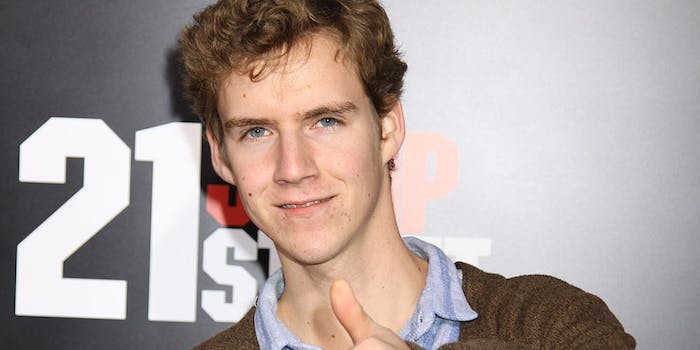 Is Dax just an act, or is he really this spastic? It's hard to tell, and that's what makes him great.

YouTube star Dax Flame is back. And he’s even got a bit of a movie career.

Flame, best known for the intense and bewildering YouTube videos he made of himself as a teenager—under the absurd name “Bernice Jauch III”—had roles in the 2012 film Project X and in the remake of 21 Jump Street.

A site called Jimmy Fungus has chronicled all that’s been up with Dax Flame, starting with last year. It’s been updated to include 2013 now. As of this month, Flame is back on YouTube!

But before all that, JimmyFungus.com posted interviews with Dax Flame about his part in Project X:

Born Madison Patrello (according to IMDB), he’s going by Dax Flame even in his blockbuster movie career. Here he is in a scene with Ellie Kemper and Channing Tatum:

Flame gathered a huge following of both devoted fans and vitriolic haters when he started vlogging as a middle schooler in 2007. People were confused as to whether Flame was a clueless, socially awkward, somewhat explosive character, or if he was a real person. The confusion led to controversy and praise, with commenters comparing Flame’s ability to stay in-character to comedian Andy Kaufman’s wacked-out characters. He became an almost instant YouTube celebrity.

During YouTube Comedy Week last month, Flame also appeared as himself in an animated short called “Hobo Etiquette.” It is supposedly based on an excerpt from Flame’s unpublished memoirs.

There is also another video starring Flame under the “Very Animated People” moniker:

Before that, he hadn’t post anything in more than a year. His fans left comments on his new video like “So happy you’re back, Dax!” and “update us on how you’ve been these past few years!”

They’re taking this crumb with a lot of excitement: Dax Flame might be back for good!