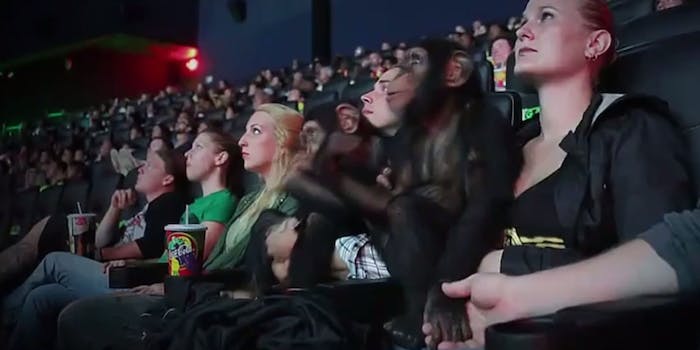 There's video of the adorable chimps not only watching and reacting to the film, but also buying their own refreshments.

Moviegoers at one screening of Dawn of the Planet of the Apes were surprised by a few of their patrons: a pair of damn dirty apes.

Two-year-old chimps Vali and Sugriva, residents of the Myrtle Beach Safari in South Carolina, were granted temporary leave from the attraction to blend in with the species that they will one day conquer. An ABC News video shows the adorable chimps, accompanied by their trainers, not only watching and reacting to the film, but also buying their own refreshments.

They couldn’t have been any more disruptive than modern-day teenagers. In fact, they were probably a lot more hygienic.

With upcoming blockbusters featuring everything from highly evolved turtles to raccoons, expect your local theater—especially if you live in South Carolina—to feel like even more of a zoo soon.