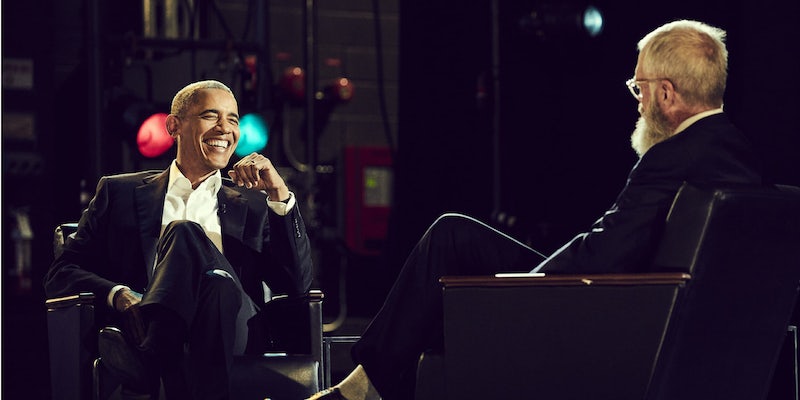 'You and I recently left long-term jobs.'

Nearly three years after he left late night, David Letterman returns in a different guise. In My Next Guest Needs No Introduction, his new six-episode weekly Netflix talk show, there’s no desk that Letterman sits behind, and no monologue or house band. The darkened stage is spare—just two chairs and an interview subject.

In the debut episode, out Friday, the subject is Barack Obama. “You and I recently left long-term jobs,” Letterman quips. In the time he’s been away, Letterman’s replacement Stephen Colbert has set his focus on Trumpland; Jimmy Kimmel has used his platform to highlight the administration as well. Sarah Silverman is trying to take an earnest look outside the “liberal bubble” on Hulu. Chelsea Handler is pivoting to politics. Would Letterman do the same? The nature of his first subject dictates that he must, but this commercial-free format allows more room to ruminate.

While Letterman obviously isn’t a fan of Trump, who appeared on The Late Show several times, the focus isn’t him. Over the hour, Letterman and Obama talk about the redefinition of facts in our collective present. “We are operating in completely different information universes,” Obama says. Letterman admits he thought Twitter would be a “mechanism” for truth-telling, but Obama swoops in: Are you really getting the truth if “you’re getting all your information off algorithms being sent to your phone?”

There’s some humor: Obama dunks on Letterman’s funemployment beard and talks about being an awkward dad. Talk turns to Obama’s upbringing, which is fairly well-tread territory. This is late-night talk. But when Obama talks about being inspired by the Civil Rights movement, the tone shifts and we’re taken to a taped segment with Letterman and Rep. John Lewis on the Edmund Pettus Bridge in Selma, Alabama. He recounts the historic walk from Selma to Montgomery in 1965, and as he and Letterman walk the bridge, it occurs that this would never be a Late Show bit, even now. But Letterman is probably happy that he doesn’t have to interview interchangeable celebs about their latest superhero movie.

He asks Lewis about Trump’s January 2016 tweets disparaging his leadership. They upset Letterman, but Lewis zooms out to make it more about the fight against hate. At the end of the episode, Letterman gets emotional wondering why he wasn’t in Selma in 1965; he tells Obama was off in the Bahamas with friends getting “shitfaced.”

It’s a somewhat fawning interview, but the segment—and his reflection—mark an interesting detour. Those who thought My Next Guest might be another round of zing-y celebrity interviews can probably rest easy, though more traditional celebs like Jay-Z and George Clooney will be included in the season. Letterman appears to be resting easier as well, and perhaps that will yield more resonant material—and deeper interviews.