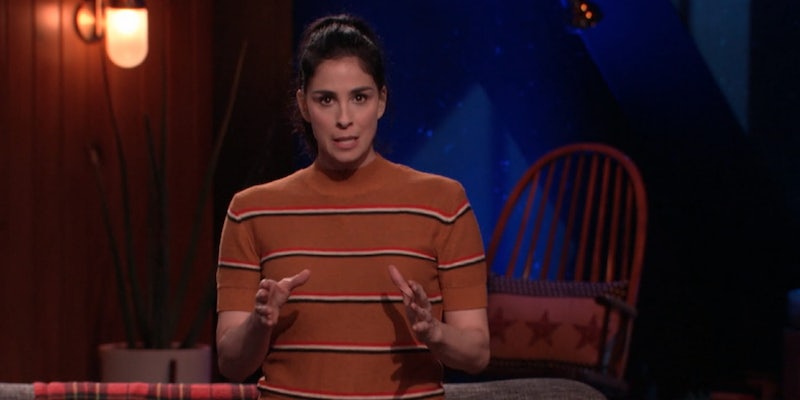 Sarah Silverman steps outside the ‘bubble’ in ‘I Love You, America’

When the Daily Dot spoke to Sarah Silverman in May about her Netflix special A Speck of Dust, she said she wanted to use her upcoming Hulu series I Love You, America to reach across the aisle and look outside the “liberal bubble.”

She mentioned this bubble on the debut episode Thursday night, but also quickly dispensed with any uncomfortableness the audience might be feeling about this new venture by showing us the most taboo thing she could: people’s genitals. This is Sarah Silverman’s show, and she let us know right away.

For its first dance with late night, Hulu takes the Netflix-Chelsea Handler approach with weekly episodes, but that’s about where the comparisons to Handler or other late-night shows end. I Love You, America’s set feels like a throwback to a late-’90s MTV show and Silverman has a “white guy at a desk” to throw to in case America needs comfort. That silly, “Oh you old so-and-so” vibe fits into the show’s nostalgic feel, but a joke about white guys and comfort lands at a time when it has much more weight. Perhaps Silverman will grind that down on a future show.

It’s an uneven approach and Silverman explains this, a few times. But I Love You, America tries balancing personal exploration—Silverman tells the audience she’s trying to change her “cunty” behavior by being open to more viewpoints—with bubble-popping. She travels to Louisiana to visit a Trump-voting family but doesn’t make them seem like a joke, like a Stewart-era Daily Show segment might. She interviews Megan Phelps-Roper, formerly of the hate group Westboro Baptist Church, who explains that her viewpoints started to evolve when she got on Twitter in 2009 and was able to have measured conversations with people, which seems positively quaint now.

With both interviews, Silverman listens and responds but doesn’t challenge; she doesn’t eviscerate anyone. This might seem odd, given the clickable rage that’s come out of late night, but if Silverman’s going to disembowel it’s going to be subtle. In May, she said: “In times where truth has no currency, I think the most truth you can really get is through comedy, even if it’s made-up jokes.” I Love You, America is trying to get us through something, offer some currency. The way Silverman’s doing it just might take some getting used to.