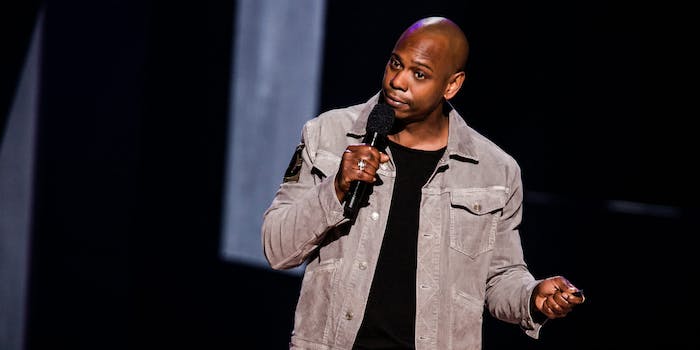 He offers some hints about why he left entertainment.

Netflix bet on Dave Chappelle, and has seen a nice return on investment. The comedian now has four standup specials on the platform, all in one year. And his two newest certainly feel more timely than The Age of Spin and Deep in the Heart of Texas. He’s even vaping in one.

Filmed in D.C., Equanimity is Chappelle’s atonement special, as he attempts to clarify his thoughts on two issues that brought him backlash: the transphobic jokes of his earlier Netflix special and comments on President Donald Trump. But before he addresses that, he front-loads the special with thoughts on why people are too sensitive now, winding around a joke about an interracial couple’s baby.

“People get mad about everything I say,” he says.

This is ostensibly to set the table for addressing the controversial trans jokes, which is laced with the “I was just fucking around” disclaimer, but he still adds that being trans is “kind of fucking hilarious.” So when he relates that a transgender fan left a letter at his hotel explaining why they were “devastated” about his jokes, you’re not exactly sure if he truly, as he says, felt bad about it.

Chappelle doesn’t apologize, but admits that even though he doesn’t “understand all the choices people make,” those are personal choices. He further posits that the conversation around trans issues is “skewed” because white men are leading it, but that excludes many of the non-white, non-Caitlyn Jenner trans voices who are doing actual work. Why not highlight some of those? Maybe Chappelle doesn’t know any.

Chappelle pivots to Election Day in the last half, claiming he knew Trump would be president because of the “long line of dusty white people” waiting to vote. “Poor whites are my least favorite,” he says, adding that he felt sorry for them because he knew Trump wouldn’t fight for them. He laments that November 2016 SNL monologue, in which he said we should give Trump a chance and corrects course by relating the story of Emmett Till (and the recent revelation about the truth) to illustrate how there might still be hope.

In one of the many thinkpieces that surfaced after his March specials, Vulture asked if we expected “too much” from Chappelle and suggested that “Chappelle’s most difficult task—which is true for every comedian of his generation—is to thread the needle and make his fans understand a lifestyle they have no ability to truly comprehend.” Can he be rich and successful (as he reiterates several times during the new specials) and still be relatable, or offer truths about experiences not his own?

That argument is further muddled in The Bird Revelation, filmed in secret at L.A.’s Comedy Store in November. “Everything is funny until it happens to you,” he says. Chappelle immediately jumps into talking about all the sexual assault allegations of the last few months, and adds some lukewarm jokes about Harvey Weinstein and Kevin Spacey. When he transitions into talking about Louis C.K., however, the ground gives way.

The Louis C.K. allegations made Chappelle laugh, he admits. Those women who left comedy after C.K. masturbated in front of them? He insinuates that they didn’t have the “spirit” to continue. In his attempt to draw a line of comparison, he goes through the history of Black people in America, contrasting that never-ending struggle against white people’s “brittle spirit” over athletes kneeling during the anthem. But the issues of sexual assault and people being upset about athletes are not the same.

Chappelle tries to relate to what women are going through, but does it through his own lens: He admits it’s hard for him to watch porn in the Me Too era. He digs a little deeper with his closer. “You can’t ask every woman to hold the line,” he says. “Some women can carry things heavier than others.” This leads into a bit about the pimp Iceberg Slim’s insidious methods of “breaking” women that worked for him, ostensibly as a comment on sexism, but Chappelle hints that the story has something to do with why he left Hollywood at the height of his fame.

Both sets end on more serious notes about the state of culture, though there are still a few moments that take you out of it, like a cringe-worthy“Upside Down” reference. (It sure seems like comedians are contractually obligated to reference Netflix in their specials.) Taken as a full volume, his four specials offer some conflicting viewpoints, but these two feel like they offer more revelations about Chappelle.