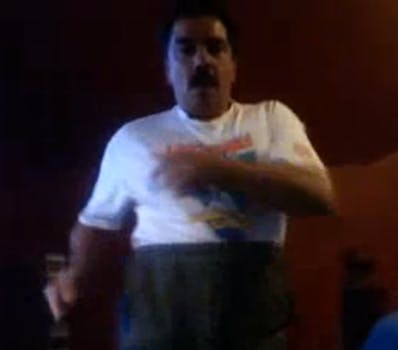 Thriller: The legend of “Dancing Ricky”

The story behind the best YouTube video you’ve never seen.

This weekend we were tipped to a YouTube video of an adult male named Rick Scardino dancing to Michael Jackson’s “Thriller” in Sept. 2006. Titled “Dancing Ricky,” the video quickly earned our adoration as a diamond in the rough, the type of clip that only comes around once every full moon.

Filmed in low lighting, the video finds mustached Rick Scardino standing in hiked up sweatpants and a white T-shirt. He shakes his hands at the camera then shuffles right, shuffles left, and flashes his fingers. Scardino backs up and does a scissoring swordfish motion with both arms. He sashays then moseys to the front, licks his finger and presses it to his breast. His hips jut out and then he’s back again, prancing, stuttering, waiting, then prowling. Then a quick back-and-forth with both hands and boom, he’s on his knees with his face less than a foot away from the lens. Then he pounces up again and lunges backwards, his arms waving side to side as he moonwalks and breaks into the elephant dance.

It’s a minute-long video. That sequence all occurs within the first 18 seconds. It’s like one priceless GIF after another—and not one move is copped from Jackson’s iconic music video.

“What the hell is going on here?” we asked. “And how in the world does someone learn to dance like that?”

It was essential that we got some answers, so the Daily Dot made arrangements to speak with Scardino on Monday.

We went in to the phone call with only one question: “Where did you learn to dance like this?”

He chuckled in response. “God given talent can’t be taught.”

Pressed for more information on the mayhem, Scardino told the video’s story.

I had a 17-year-old son at the time who’s now 22. It’s a miracle he’s made it to that age. Anyway, he had a habit of being in his room with his headphones on and connected to some Shea Stadium speakers that were playing music while he’d dance up and down so hard that it felt like the house was caving in.

At one point, I was wondering what the hell was going on up there, so I went upstairs and his door’s locked. You know, if you’re a teenager, it’s a rite of passage for your door to be locked. So I start beating on the door to try to get him to lower the decibels before our neighbors call the police.

I’m beating incessantly, and somehow he hears it in between the music.

He turns the music off and opens the door. He’s got his headphones on and he’s pouring sweat.

He looks at me and goes, “What’s up?” I’m like, “What the hell—what the hell are you doing in here? It feels like the house is caving in.”

He says he’s just dancing, so I looked at him and I say “Listen, you have to understand that this is something that comes to you genetically. I’ve been known to dance a mean streak in years past.”

Next thing I know, “Thriller” comes on, and, unbeknownst to me, his computer’s on and he’s got his camera rolling. The rest is history.

I think that people thought that it would ruin my career and I’d go away, but when you’re given a God given talent, you can’t keep it in a closet.