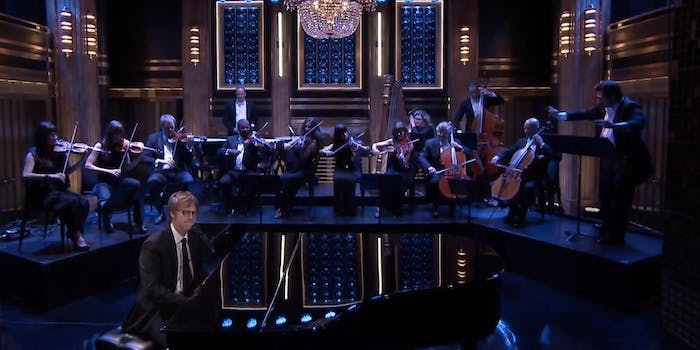 The student becomes the host.

The old guard and new masters got a chance to come together this week on The Tonight Show as Jimmy Fallon hosted Saturday Night Live idol Dana Carvey for a series of hilarious videos making the rounds even days later.

First up: The duo traded spins on a wheel of impression prompts, with both accidentally having to do their best Al Pacino. (One wasn’t able to keep a straight face; you get one guess who.)

Round two took us to California by way of Austria for a touch of Ahnold, followed by a bonus Matthew McConaughey, because who can resist?

To cap off the evening, Carvey took to the keys to deliver a rousing performance of “Choppin’ Broccoli”—his first SNL song ever, this time accompanied by a full orchestra and delivered in dramatic and increasingly linguistically indecipherable fashion.

Fallon, take notes: Maybe this tune should be the next one in your lip-synch battle rotation.