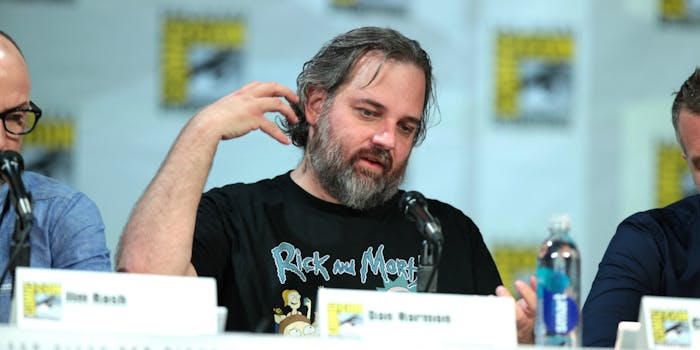 A clip from 2009 features Harmon assaulting a doll.

Dan Harmon, the co-creator of Rick and Morty, has left Twitter after his decade-old webseries Daryl resurfaced.

The series, which Harmon jokes in the intro was supposed to be for Showtime, came out in 2009 and lived on Channel 101, along with several of Harmon’s other shorts (including one from 2008 with Rick and Morty‘s Justin Roiland). He warns up front that this is his “controversial new pilot” and that is likely because Harmon’s character sexually assaults a baby doll twice in the clip. In the second episode, Daryl allegedly assaults a cat.

In the pilot episode, “Daryl” claims he can stop people from becoming serial killers by raping them as babies, and according to a post on r/Harmontown, the series was apparently a spoof of Dexter.

Channel 101 was created by Harmon and writing partner Rob Schrab as a monthly film festival where pilots are chosen by the audience, and the other content on the platform featured comedians like Sarah Silverman, Jack Black, and Bob Odenkirk. The platform also hosted the first incarnation of Rick and Morty, which involved the “Rick” character asking the “Morty” character to lick his balls.

The Daryl clip resurfaced in the wake of James Gunn’s firing by Disney after his old tweets about pedophilia and rape were dug up by conservative critics. In January, Harmon admitted to sexually harassing Community writer Megan Ganz, after she called him out.

Harmon has not yet addressed the old clip. We’ve reached out for comment.