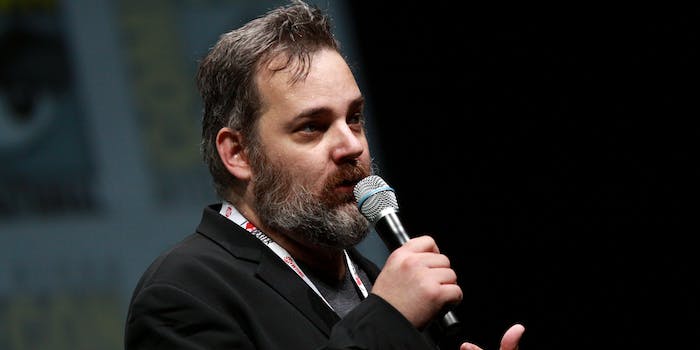 Dan Harmon details how he sexually harassed a writer on ‘Community’

'I knew enough to know that these feelings were bad news.'

Last week, Dan Harmon apologized to former Community writer Megan Ganz for abusing his position as her boss and treating her “like garbage” after she called him out on Twitter. But the co-creator of Rick and Morty and Community showrunner also addressed it in the latest episode of his Harmontown podcast, detailing just how he sexually harassed her while they worked together.

Harmon prefaced the segment, which starts at 18:38 mark, by telling his co-hosts that he has to get something off his chest. Legal counsel that he received advised against it, but he decided to talk about it after getting feedback from women creators he respected, who told him that he should hold himself accountable and be open about how he’s been part of the problem if he wants to be a part of the solution. (Harmon’s recollection of what happened on Community begins around the 20:41 mark.)

Although Harmon doesn’t mention Ganz or Community by name, it’s evident from the hints he gives that he’s talking about both based on the timeline and his description of running a “network sitcom.” He said that he was “attracted to an employee,” though he’s careful not to conflate it with the kind of language that could possibly romanticize a power dynamic; as Ganz’s boss and the series showrunner, Harmon had leverage over her.

“I knew enough to know that these feelings were bad news,” he said. “That was easy enough to know. I knew that they ran the risk of undercutting people’s faith in my judgment, her faith in her talent, the other writers’ respect for me, the entire production, the audience. I knew that I wasn’t doing anybody any favors by feeling these things. And so I did the cowardly, easiest, laziest thing you could do with feelings like that, and I didn’t deal with them. And in not dealing with them I made everybody else deal with them, especially her.”

Harmon recounted acting “flirty” and “creepy” toward Ganz and lying to his girlfriend at the time–and himself—about it. When confronted by others about his behavior, he used his public support of women and declaration that he was a feminist as a shield to call those who accused him of inappropriate behavior sexist. It didn’t help him to hear it, so he ignored it.

Harmon has had time to collect his thoughts, and the way he presents what happened during his years of sexually harassing Ganz is designed to sound “relatively unremarkable.” They may have worked on a critically acclaimed comedy together, but the power dynamic between the two and much of what he did to harass Ganz (and later punish her) could happen anywhere. For many women, it’s a very familiar and depressing story.

His harassment escalated over subsequent seasons, and Ganz told him that what he put her through made her doubt if she was good at her job. Harmon professed his love, but Ganz again pointed out she didn’t share his feeling but was at a disadvantage because he was her boss. Humiliated and rejected, Harmon said that he “wanted to teach her a lesson” and punish her for not reciprocating what he believed at the time to be feelings for her. He acknowledged that he then made Ganz’s life a living hell—what she has since referred to as “trauma.” Harmon explicitly stated that he treated Ganz in a way that he would never have done to a male writer. Harmon lost his job, said he ruined his show, and he was still in denial about what he had done.

He offered Ganz another apology, but he also acknowledged that he got away with it by not thinking about it—something that he said probably would have continued doing had Ganz not called him out on it. He said he hoped speaking publicly about it encouraged other men to actually think about how their actions affect others.

After the episode was posted online, Ganz took to Twitter and urged her followers to listen to the episode. She called it “a masterclass in How to Apologize,” acknowledging that Harmon went beyond talking generally about what he did. She expressed vindication of getting an apology she’d been waiting six years to receive, as well as offering Harmon forgiveness.

I’m not being flippant. I didn’t bring up this mess just to sweep it back under the rug. But I find myself in the odd position of having requested an apology publicly, and then having received one—a good one—also publicly. I waited 6 years for it, but you can find it 18:38 in.

Please listen to it. It’s only seven minutes long, but it is a masterclass in How to Apologize. He’s not rationalizing or justifying or making excuses. He doesn’t just vaguely acknowledge some general wrongdoing in the past. He gives a full account.

Yes, I only listened because I expected an apology. But what I didn't expect was the relief I’d feel just hearing him say these things actually happened. I didn’t dream it. I’m not crazy. Ironic that the only person who could give me that comfort is the one person I’d never ask.

This was never about vengeance; it's about vindication. That's why it didn’t feel right to just accept his apology in private (although I did that, too). Because if any part of this process should be done in the light, it’s the forgiveness part. And so, @danharmon, I forgive you.

You can listen to the full episode on Harmontown’s website.