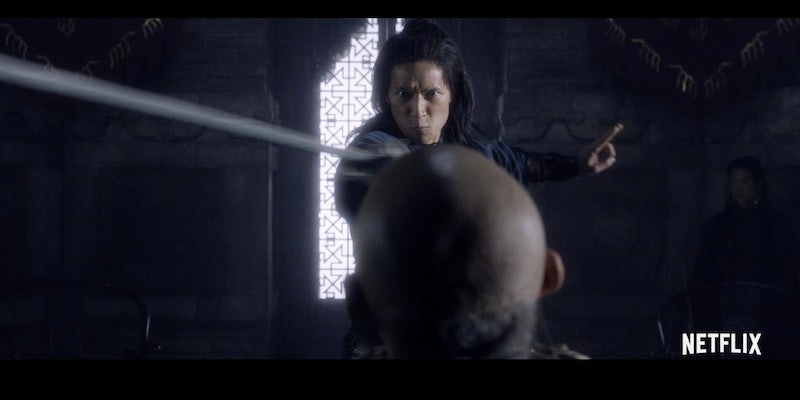 If you liked ‘Crouching Tiger,’ you’ll hate its direct-to-Netflix sequel

'Sword of Destiny' is an opportunistic failure.

If you liked Crouching Tiger, Hidden Dragon, you will absolutely hate Sword of Destiny, the direct-to-Netflix knockoff now streaming on the site. A decade ago, back when people still rented DVDs, this was the kind of movie that would be dumped ignominiously at a Blockbuster, tucked behind a wall full of copies of Freddy Got Fingered. That’s precisely where it belongs, hidden away where no one can see it.

In the opening of Sword of Destiny, Yu Shu Lien (Michelle Yeoh) says that a warrior is destined to be remembered 20 years after his death. But in the case of this movie, that’s about 20 years too long.

Aside from the title, Sword of Destiny has almost nothing to do with the 2000 original, a surprise smash that brought a wave of wuxia films to the United States (Hero, House of Flying Daggers). Directed by Woo-Ping Yuen (Iron Monkey), this is the equivalent of one of those imitation “Prado” bags you pick up in Chinatown. It might look passable at first, but it’s bad stitching that falls apart quickly.

Sword of Destiny picks up decades after Yu Shu Lien’s lover, Li Mu Bai (Chow Yun-fat), died in her arms, but aside from an intro reminding us this is the same series, there’s almost nothing that spiritually or tonally connects the two films. Where the original was impassioned and lyrical, its follow-up feels rushed, clunky, and surprisingly jokey. In Sword of Destiny, Yu Shu Lien must protect the titular weapon, which still holds extraordinary powers, from a band of usurpers who want the Green Destiny for themselves. It’s more or less the same plot as before, but any resemblance between the two has an Uncanny Valley effect: Many bad movies are offensive or painful, but this one feels just plain wrong.

If the movie’s subtle colonialism isn’t distracting enough, Sword of Destiny appears to be filmed in a diffuse glow.

Let’s start with the film’s most glaring creative mistake. For some reason, the filmmakers chose to shoot Sword of Destiny on location in New Zealand, which makes the proceedings feel less like a martial arts film than an episode of Game of Thrones. You may as well be in the Shire with Bilbo Baggins. This issue is not helped by the decision to have all the actors speak in faux British accents this time around, rather than Cantonese, lest the subtitles put anyone off.

If the movie’s subtle colonialism isn’t distracting enough, Sword of Destiny appears to be filmed in a diffuse glow—which gives the movie a mise en scène that perpetually resembles a wuxia Glamour Shot. Every frame looks vaguely embalmed. Woo-Ping Yuen was the man behind the death-defying stunts of the original (Ang Lee declined to return), and he shoots the movie like a choreographer—with little sense of setting, ambiance, or character. While the fighting itself is passable, Yuen has little idea how to film his elaborate stunts. Whereas the original felt the weight of gravity, here it just looks like every ancient Chinese warrior was gifted with the magic powers of flight (with a little help from their friends in the CGI department).

Sword of Destiny’s failings would be less egregious if there were much of a story to get invested in, but the attempt to recreate the original’s high-flying romance is laughable. Chow Yun-fat’s torch is passed to Harry Shum Jr. (Tiefang), whom you may remember as Asian Mike from Glee. His scenes with Natasha Liu Bordizzo (Snow Vase, a pupil of Yu Shu Lien’s) are unintentionally funny. He’s supposed to be a conflicted warrior, sent to steal the sword for his master, Hades Dai (Jason Scott Lee), and she’s a young wannabe fighter who finds herself strangely drawn to Tiefang, despite her expressed loathing for him. But instead of building up to a good hate-fuck, it appears as if the two may break into song at any moment.

Many—like the Verge’s Tasha Robinson—argued that Sword of Destiny would be better received if it were simply its own standalone movie, divorced from such an iconic predecessor. If you have to live up to one of the greatest martial arts movies ever made, surely you’ll fail.

That’s a nice sentiment, but frankly, Sword of Destiny didn’t need anyone else’s help to be a bad movie. It’s a stilted, strangely dull effort that rarely finds its dramatic footing or makes viewers care much about what’s happening on-screen. Many of the characters—including a band of warriors inserted for comic relief—are barely fleshed out, and the disparate storylines never gel into anything resembling a cohesive whole. Yu Shu Lien gets yet another doomed love affair with Silent Wolf (Donnie Yen of the Ip Man series), but their unconvincing backstory feels oddly first draft-y, tossed in to remind reviews of the original. That pretty much sums up the movie itself.

In recent months, Netflix has developed a reputation for half-baked originals that unsuccessfully bank on viewer nostalgia—between Fuller House and their partnership with Adam Sandler. Sword of Destiny might not be nearly as horrendous as Ridiculous 6, the first film in Sandler’s four-picture deal with the streaming platform, but its existence is a troubling sign of things to come for the company. Nostalgia is nice, but Netflix should just focus on making better content.