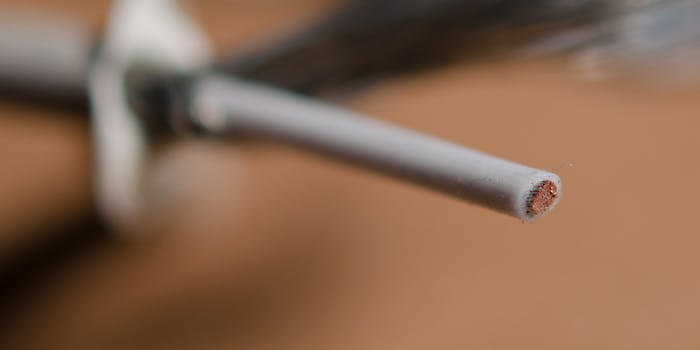 I cut the cord and the cord won

Live sports and the Hallmark Channel—yes, really—are hard to live without.

My week without cable television has been miserable. I missed ESPN, CNBC, and the Phoenix Suns, and hated getting up to move my indoor antenna around to watch the Arizona Cardinals trounce the Detroit Lions. Count me among those willing to pay that exorbitant monthly fee until something better comes along.

I have been a continuous cable TV subscriber since 1978—save for one year in Mill Valley, Calif., when I was a beta customer of a satellite service called USSB which later became DirecTV. I was among the first HBO subscribers with Service Electronic in Allentown, Pa., one of the nation’s earliest cable TV franchises. Perhaps naive at the time, I saw great value in getting lots of television stations with crystal-clear reception. I even recall on one of my early dates with my now-wife of 30 years showing her this amazing new channel called MTV that broadcast something called music videos. Ah, Mark Goodman, where are you now that we need you?

Because we have been unable to sell our (now vacant) home in Arizona, we were forced to cut back expenses, so our monthly cable TV service had to go. We had to return to our abode in the Valley of the Sun for one week, and it was during those awful seven days I became a reluctant cord cutter. My viewing options included over-the-air TV, my Amazon Fire box, and Roku streaming stick. I also had my iPad, which helped somewhat. I was smart enough to keep our high-speed Internet service, or we would have been limited to local news and, I kid you not, old reruns of The Real McCoys on something called Cozi TV, an over-the-air channel.

After hooking up my digital HD antenna to watch the Cardinals game, I got a “weak signal” message on screen when I tuned into the local Fox affiliate. Like a goofball out of a bad ’50s sitcom, I wandered around the room with antenna in hand until reception improved. That was fine until I wanted to change stations to watch the Sunday night game on NBC. Off the couch, do the antenna dance, and wait for the peacock to come to life.

Because Fox Sports Arizona has the rights for most of the Phoenix Suns games (and Coyotes of the NHL), I wasn’t able to watch any of those events. Fox Sports AZ is only available via one of the subscription services (cable, satellite), as is Fox’s new all-sports network, Fox Sports 1, which handles the NFL post game shows. Speaking of sports, my morning ritual of watching Dan Patrick on cable was also put on hold during my hiatus.

As far as ESPN goes, I have the ESPN app on Amazon Fire, but my attempt to watch Monday Night Football was thwarted by constant buffering of the broadcast, which is maddening during a live event. The same goes for my CNN app, which would stop and start in irritating fashion. If there had been a major national or international event, my choices would have been severely limited.

A few years ago, my wife introduced me to the sappy, faith-based (not religious) movies on the Hallmark Channel, and I’ve become a fan. No judging. Hallmark Channel is a non-starter for anything other than a cable or satellite TV. There are some older Hallmark telemovies on Netflix and Hulu, but they are dated and some of the network’s weaker offerings. Speaking of Hulu, I am a fan of the CNBC show The Profit, but I noticed Hulu’s episodes were a few weeks behind.

I am a current subscriber of Time Warner Cable in Texas and have the app that goes with it. Out of your home, though, it’s not much of a help, as it limits the channels you can watch to a handful of second-tier options and the local Time Warner Austin news channel. What was helpful was the ability to set our remote DVR to record a number of shows to watch when we return to the Lone Star State. Speaking of DVR, no cable or satellite means no DVR (technically, there are workarounds, but who has the time for that?). Since I sold my last VCR at a garage sale, we were stuck watching Shark Tank live on Friday night as opposed to our customary two- or three-day delay.

The term “cord cutter” is really a misconception. Those who see promise in the advancing cloud TV services or direct-to-consumer versions of HBO and Showtime are going to be more dependant on cords than ever. You’ll just trade one costly cord—cable—for another in the form of a high-speed Internet connection needed to provide enough juice to power up these new TV services.

For me, the math makes some cord-cutting scenarios a curious economic exercise. If you pay $80 or $90 a month for cable or satellite, how many cloud TV services would it take to cover all the programming you want to watch? For me, I would need ESPN, CNN, CNBC, NBCSN (for Dan Patrick), the local Fox Sports (for local teams), Hallmark, and a few other cable nets such as Food Network, Bravo, and A&E. As the Dish, Sony, and other cloud services roll out—along with HBO Go and some other premiums—I sense a monthly bill that eclipses what I now pay for cable. Factor in Hulu Plus and Netflix, and the bank is broken.

For the time being, fighting the cord—at least for me—is a losing battle.

Photo via Mark Fickett/Flickr (CC BY 2.0)