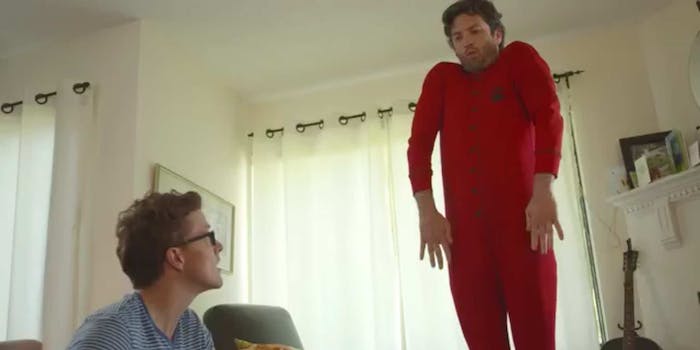 In Matthew Clarke's breakout YouTube series, his 2-year-old daughter is played by a full-grown man.

If you’ve hung out around kids aged 2, 3, 4 years old, you may have noticed they often act like tiny drunks. They have no filter. They are not self-conscious. They fall down a lot. This idea did not escape Vancouver writer and filmmaker Matthew Clarke, who took conversations he had with his 2-year-old daughter, Coco, and created a weekly series on YouTube called Convos With My 2-Year-Old.

He says if someone overheard two adults having the same conversations he had with Coco, they’d be “committed,” so he committed actor and friend David Milchard to the role of Coco, and he plays her up with deadpan wit, often dressing in some approximation of her clothes, lending a more ominous tone to her words. “The idea from the beginning was [to have] a grown man play the role of my daughter,” Clarke says. “[David and I] have similar comedic tastes, and he’s the most opposite of a two-year-old girl that I know.”

The mostly positive response has helped the videos go viral, and thrust Clarke and Milchard into the Internet spotlight. This week’s episode, out today, explores the absurd boundaries of playtime. We asked Clarke a bit about why kids are comedy gold.

Daily Dot: Why is the idea of a grown man saying these things funnier? David’s delivery certainly changes the tone.

Totally, it becomes more of a satire of the whole thing. Kids have this natural vulnerability about them; they’re these innocent, pristine creatures, in a selfish, narcissistic way, which is essential to their development. David doesn’t have that. When you take away that innocence, and you’re left with the narcissistic, selfish qualities, it highlights the absurdity of these interactions.

DD: Why do you think it’s done so well? Because it’s relatable?

When I first thought of it, I didn’t think people would relate. These were very personal interactions that were funny in my own world, but I didn’t think it would be funny outside that. And I think [the response] shows how defined these relationships are between parents and kids.

DD: Do you think it’s relatable because there’s a new generation of parents that don’t know what they’re doing?

I don’t think anyone ever knew what they were doing. This generation, with all the info we have, maybe this generation knows more. But I don’t know if knowing what you’re doing is the most important thing. There is something about this generation finding comedy or humor in their kids. This influx of ironic parent humor. People are more inspired by their kids. Especially as a father, I think we’re more engaged now than past generations. The more you’re around your kids, the more inspired you are.

DD: Does your daughter have a sense of humor?

I think she’s hilarious, obviously. She has a very natural comedic timing, and it’s very cool to see that at such a young age. They have personalities right away, and you can see them become so defined in such a small body.