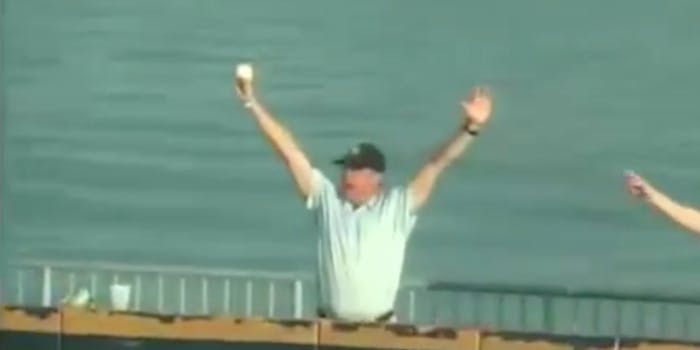 "He may have to watch every game from out there."

Houston Astros outfield prospect Conrad Gregor’s hitting .299 with 13 doubles and 27 RBI at Class A Quad Cities, but until Sunday he hadn’t hit a home run.

His first dinger, a three-run shot to right that put the River Bandits up 4-2 over the Cedar Rapids Kernels, was a special one—and not only because it got the homer-less monkey off his back. Turns out the guy at the end of the video’s actually one of Gregor’s biggest fans.

“That was my dad,” the 22-year-old prospect told Quad City Times beat writer Steve Batterson. “He may have to watch every game from out there. It’s a little unbelievable, but I’m glad my parents were here to see it. When I got back to the dugout, I heard he made a pretty good catch.”