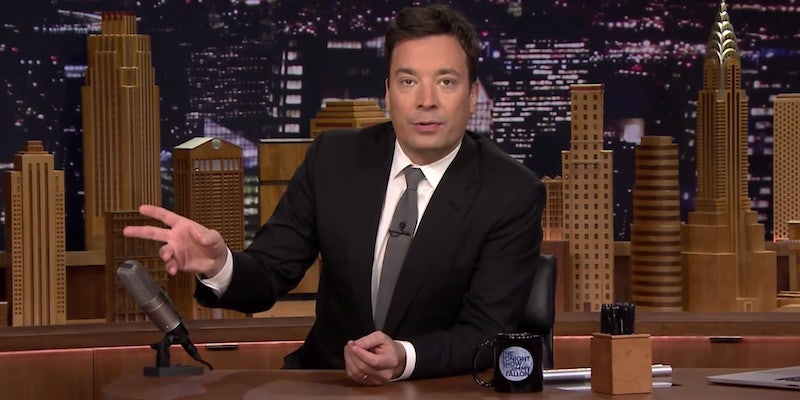 He may have a point.

Last Thursday, longtime Conan writer Andrés du Bouchet tweeted out his thoughts about the state of late-night TV. They’ve since been deleted, but the folks at Uproxx had the foresight to strike while the tweetstorm was hot: 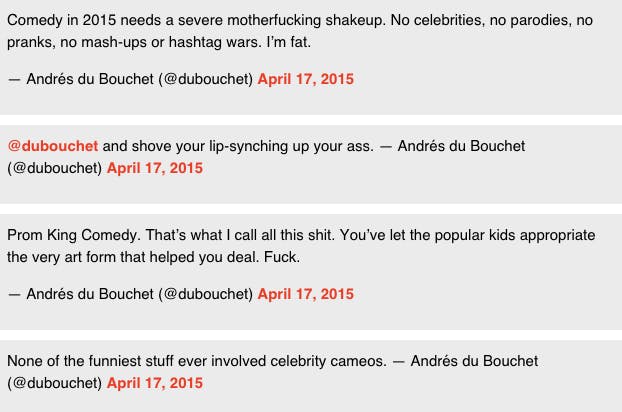 He also called out the “games and lip synching and nostalgia and karaoke” that shows like Jimmy Kimmel Live and The Tonight Show Starring Jimmy Fallon thrive on. Perhaps du Bouchet realized how much traction the tweets got, or that he still needed to face his boss at work, because he did apologize: “Sorry for being a bloviating elitist windbag last night. I know tons of talented people are making the stuff I enjoy shitting all over.” In a separate tweet, he also stated, “Once again I’m a bonehead for tweeting as a fan of comedy instead of as a guy who earns a living doing it.”

His boss addressed the situation with a tweet on Sunday, perhaps as damage control:

I wish one of my writers would focus on making my show funnier instead of tweeting stupid things about the state of late night comedy.

Bits on The Tonight Show and Jimmy Kimmel Live often live on the Internet first, and the TV screen second. They’re made to go viral and be bite-sized and sharable and reach the cordcutters. Even segments from cable heavies like John Oliver, Jon Stewart, and Stephen Colbert are packaged as Internet-friendly bits. That doesn’t that make it wrong, but du Bouchet seems to be calling out the calculated gimmicks especially.

The Kimmel-Fallon machine is at the center of this late-night clickbait phenomenon. Fallon, as we’ve pointed out before, goes for the nostalgia vein and employs celebrities as part of ridiculous stunts. Kimmel’s talent is trolling us, often to the point of anger. Fallon’s celebrity lip-sync battles have become so popular, there’s now a show devoted to it. New late-night host James Corden is a performer, and it’s likely one of the big factors in his hiring. Late-night hosts have to be performers, not just interviewers.

You can get upset that the clickbait exists, but people are obviously clicking. You can scoff at Fallon’s Fresh Prince remake, but don’t you kind of … want to see it? However, you can’t blame the writers and producers of these shows for knowing what will get clicks and how to keep viewers engaged. And Fallon’s success has come via YouTube, which is important if you’re trying to reach a younger demo.

O’Brien does his share of stunts and parodies too, but not quite to the degree of Kimmel and Fallon or the “hashtag wars” that drive Comedy Central’s @Midnight. The “prom king comedy,” as du Bouchet called it, isn’t really O’Brien’s bag. (He might have also been hinting at the fact that there are no women on late-night TV?)

With Letterman leaving soon and Colbert taking over, it will be interesting to see how or if this clickbait dynamic changes. As Uproxx pointed out, “there is nothing wrong with there being a version of late night that exists for the masses (Prom King Comedy and all) and one that exists for the cool kids.” Yes, comedy and late-night needs a shakeup. This is how it evolves, and how it has for decades. Colbert and O’Brien are of one school of comedy; Kimmel and Fallon are of another.

As for du Bouchet, it looks like he just wants to put all this behind him. And he has some excellent pitches for Vin Diesel.