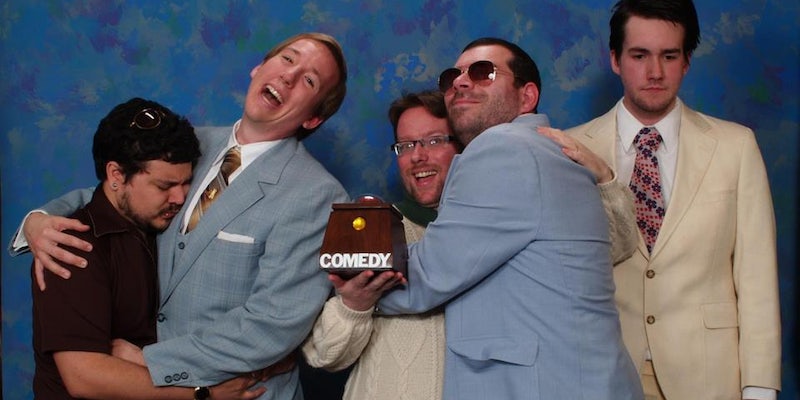 How a 'nerd pop culture podcast' is bridging the gap.

Facing a field of tens of thousands of podcasts and millions upon millions of episodes, how do you find the diamond in the rough? Podcasting as a whole is an incredibly competitive field, and only a distinguished few can reach successful download numbers.

But consider the added degree of difficulty for comedy podcasts: Material can’t be pre-prepared, with every joke quick and off-the-cuff… but no audience in the room to gauge reactions from. One comedy podcast that pulls this off is The Comedy Button.

The Button’s team of five began putting out weekly episodes of their “nerd pop culture podcast” in 2011, after successfully shattering a Kickstarter goal of $6,000 more than six times over. The hosts berate one another while discussing life stories in a remarkably deep and genuine way, and the format has struck a chord with its listeners: Four years later, the show continues to grow, and it now boasts a massive 500,000 downloads a month and is bringing in over $19,000 a month on Patreon, all for what Scoville describes as “not our day job”—and it shows no signs of waning.

I was able to sit down with co-hosts Brian Altano and Max Scoville over Skype to get some insight on what makes The Comedy Button such a winning formula.

Altano describes The Comedy Button rather succinctly: “It’s like hanging out with your friends, but I think that we kind of actually nail that.” And it’s true: Very few shows can really pull off “hanging out with friends” in such a way that merely listening in is entertaining. Kevin Smith and Scott Mosier pull this off rather well on their show Smodcast. There are far too many podcasts out there that try to be overly bold and brash but fail at creating something as genuine with the same level of harmony.

But really, success lies in the incredibly personal relationship the five co-hosts have with their fanbase. Fans have followed these men through firings, hirings, breakups, and marriages. For all intents and purposes, many have grown up right alongside the cast, and vice versa: “We’ve kind of grown with that audience” says Altano. “It’s like if The Breakfast Club was all dudes,” Scoville adds.

By the very nature of living life on the air, it’s not always pure comedy, though. “It’s very personal; it’s not always funny. Sometimes it’s really sad and awful,” Scoville explains of the more difficult-to-tell stories. But funny or tragic, all of the gang’s stories are honest, sprouting naturally from their casual back-and-forth bantering. “We don’t really plan anything,” Scoville says. As a result, the show feels very impromptu, but that’s what makes it interesting. It doesn’t try to fall back on tentpole segments found in other podcasts, and each episode feels different from the last.

Throughout the entire interview, there was a clear beat and rhythm that the two were dancing along to. Altano and Scoville can engage themselves in these verbal gymnastic routines, and if one stumbles, the other is there to pick up the pace and bring back the ebb and flow.

Most telling, however, was how Altano analyzed life and the world around him. Being a comedian, he looks at the world with a slightly skewed perspective, always seeking the good, the funny, or the bad from what many of us take as normal or mundane. “The fact that we’re even talking right now is amazing,” he exclaimed. “You could have just sent me an email, [but] you’re like, ‘I wanna Skype with you,’ and that’s amazing.” That kind of go-getter, do whatever’s necessary attitude is the frame of mind Altano wants to keep throughout the show.

It definitely shows. The crew constantly belittle one another for not pushing to succeed in various aspects of their lives. While cohost Scott Bromley was unemployed, for example, the team definitely called him out on his funk and pushed him to get back in the game. When cohost Anthony Gallegos was laid off from his job, the others would not let up on comparing him to a hippie. It was both good entertainment and a nice dose of inspiration.

So, sure, there’s plenty of swearing and raunchy humor, but Altano really does want to create an environment in which the positive is pushed forward. For those fans who find themselves struggling through a particularly difficult part of their lives—saying to themselves, “Hey, how the fuck do I get through this?”—Altano wants to reassure them that “it’s OK, we did that too, and it sucked, and it was horrible, but it’s OK on the other side.’”

Ultimately, the reason the show works so well is because the cast genuinely has fun creating it. “We’ve always said that if the audience went away, we would keep doing it,” says Altano. And quite honestly, I believe him. The show is just as therapeutic to its hosts as it is to its fans. “I love the idea of us getting old together,” says Scoville as he gives his thoughts on the future of the show. And that’s the beauty of The Comedy Button. It’s five friends doing a podcast for no other reason than that they want to. It’s a creator-fueled fever dream come true.

Photo via The Comedy Button