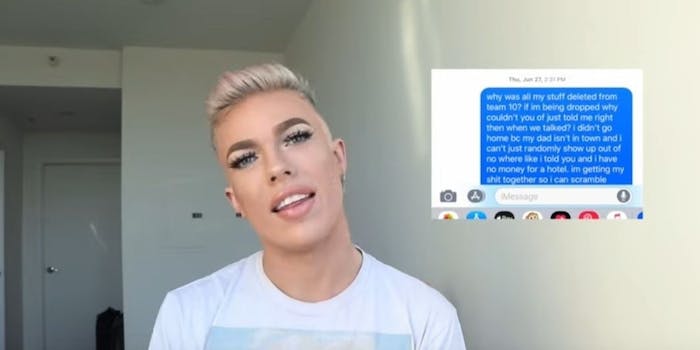 He called me 'a piece of sh*t, saying I’m trash,' Carrigan said.

Those who partner with Jake Paul and his Team 10 incubator group for YouTube fame usually end up leaving then making a video with plenty of accusations about why. Beauty vlogger Cole Carrigan is no exception.

According to Carrigan, at least one Team 10 member bullied him and called him a “faggot” during a verbal altercation in Las Vegas.

Carrigan lived in Paul’s Team 10 house in southern California, but after a big blow up on a trip to celebrate Tana Mongeau’s 21st birthday last month, Carrigan said Team 10 member Arman Izadi called him “a faggot, saying all I do is paint my face.” Carrigan also said Team 10 manager Adam Quinn hacked into Carrigan’s Instagram account and that the entire team is bullying him.

In his 23-minute video, Carrigan— who has about 88,000 YouTube subscribers and who recently made news for getting into a verbal confrontation with another YouTuber at a house party—explained the altercation that ultimately led to his departure from Team 10.

In Las Vegas for Mongeau’s birthday, the same weekend Paul and Mongeau said they got engaged, Carrigan said he was allowed to go clubbing with Team 10 even though he was only 20 at the time. But Izadi—who was convicted of attempted battery and who pleaded guilty to pandering, the legal term for being a pimp, earlier this decade—said he didn’t want Carrigan to go out.

Izadi called me “a piece of shit, saying I’m trash, dirt, lazy, unproductive, selfish, egotistical,” Carrigan said. “I’m talking every name in the book to the point where I’m bawling my eyes out. I’m taking every dig he’s saying to me and crying as I’m wheeling my fucking suitcase out.”

The next morning Izadi claimed Carrigan was throwing water bottles on his TVs and disrespecting him in his house. Carrigan said Paul and Quinn took Izadi’s side and eventually kicked Carrigan out of the Team 10 house.

Team 10 did not immediately respond to a Daily Dot request for comment on all of Carrigan’s accusations.

Earlier this month, two women said they had been kicked out of a Team 10 party after a member made transphobic comments.

Last year, it seemed Team 10 was on life support because so many members had left in such a short amount of time. Now, Carrigan has ended his brief tenure in Team 10.

In a previous video, Paul called him lazy and unproductive (Carrigan counters that by saying it took him months to get the materials he needed to begin vlogging for Team 10).

“I am over this bullshit of me giving fucking everything to these people who are at such a small point in their career,” Paul said. “I mentor them. I become their friends. I give them hugs when they’re crying.”

Paul also called himself a good person. Though Carrigan said he respects Paul’s work ethic, he might disagree with Paul’s opinion on that.

“I trusted these people,” Carrigan said. “My family trusted these people. … I moved my whole life out here because I trusted them. I was so hesitant with signing this contact because of the history and because of the old Team 10 and what I heard and saw. I wanted to give them the benefit of the doubt … For them to throw me out on the street basically over something so minor … shows me I didn’t need those people in my life.”