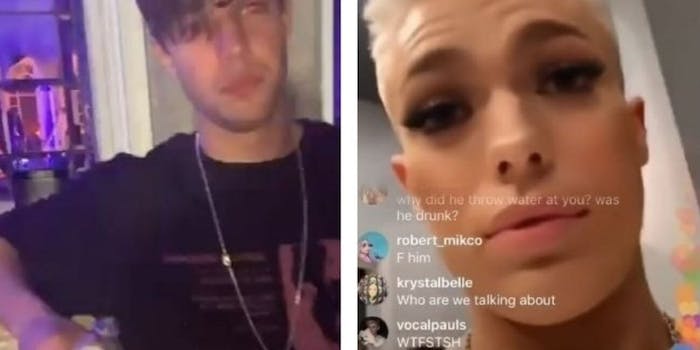 Things got out of hand.

Beauty vlogger Cole Carrigan blasted YouTube star Cameron Dallas for being homophobic after Dallas apparently spilled water all over Carrigan’s pants at a party on Saturday.

According to Carrigan, Dallas—who has more than 5.6 million YouTube subscribers—approached him at Jake Paul’s party on Saturday, and without any provocation, dumped water on the unsuspecting Carrigan.

Immediately, Carrigan began filming Dallas and said, “I’m in my own fucking house and literally talking to my fucking friend and fucking ugly-ass Cameron Dallas is fucking throwing water all over my fucking pants like a piece of shit. So fuck you.”

Dallas, shown on the video with a water bottle in his hand, looked stunned and didn’t say anything during Carrigan’s brief rant.

so last night at a party i was outside talking to people minding my own business when @camerondallas decides to comes up to me and throw his water bottle all over me for absolutely no reason other than being a homophobic drunk asshole. i won’t tolerate that shit. pic.twitter.com/SXNNwgCajM

But Carrigan had much more to say on Twitter about the YouTuber he called a “homophobic drunk asshole.”

“I have too much respect for myself to be silent about a situation that needs to be brought to everyone’s attention,” Carrigan said on Twitter. “The kid was shook that I started recording him and froze up real fucking quick. It’s 2019 if [you’re] still homophobic or insecure about your own sexuality so you have to take it out on people who are confident with theirs you’re TRASH.”

“wilding out” isn’t deliberately walking up to someone you don’t know and throwing your water all over them. that’s being a fucking dick and im sure if i was a pretty female or one of the “homies” that wouldn’t of happened so what else do you call it?

Dallas hasn’t commented publicly on the incident, but YouTuber Taylor Caniff also defended him, saying he “is extremely far from being homophobic.” He also accused Carrigan of simply wanting attention.

Caniff wrote on Twitter, “How is it OK to call people a bitch and say fuck you over [an] accident? and uploaded it straight to twitter for clout?! Cameron was so confused when this kid started filming him and didn’t want to take his phone or do anything because the kid was BEGGING for attention.”

Caniff continued by writing, “[Dallas] is already dealing with a lot of mental anxiety and depression. And this to add onto it because a kid wants attention. Is devastating. I want everyone happy and everyone to win at life.”

In late 2018, Dallas was arrested for allegedly assaulting a gay man who apparently had “hit on” Dallas’ friend in Aspen, Colorado. A hearing, in that case, has been pushed back into the summer.

Neither Carrigan nor Dallas immediately responded to Daily Dot messages asking about the incident.