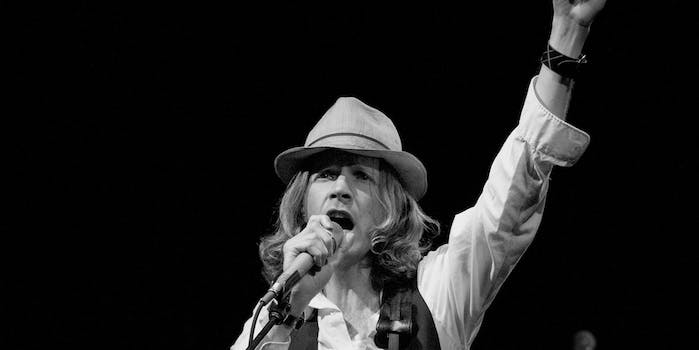 No one can be sad after a Colbert [chest] bump.

Stephen Colbert might only have limited time left on The Colbert Report, but he’s making it count by tackling his guests with the hard-hitting questions America is dying to have answered.

Monday night, self-purported “Loser” Beck stopped by the show to promote his latest effort, Morning Phase. Before rocking out performances of “The Heart Is a Drum” and “Heaven’s Ladder,” he sat down with Colbert to talk about his genre-defying album. Beck, apparently trying to give Enya and Dido a run for their melodic money, described the offering as “a little quiet, a little bit slow, good for massages and aromatherapy.”

Colbert couldn’t let his time with the musician elapse without lifting the emotional veil on the singer just to make sure that everything’s all right under there, so he trotted out his inner therapist to ask “Why Beck sad? Is Beck sad?”

The answer? Simply that he was just in need of a hug.

No sadness that couldn’t be cured with a good old fashioned bromantic embrace.