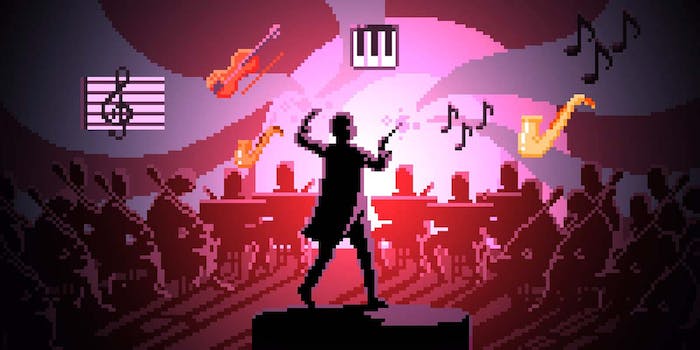 Who knew a violin emoji could be so powerful?

In a world of texts, tweets, posts, and pins, emojis—those little yellow dudes inside your phone—dramatize the emotion where words alone fail to communicate.

We use emojis to clarify a vague text message, lighten a serious conversation, or send your wife the midday “kissing heart.” But also being the (admittedly nerdy) composer that I am, I came to realize that I could put these same miniature companions to use in yet another culturally valuable way. Much like a novel or film, classical music utilizes many of the same storytelling devices: various narratives become subjects and counter-subjects, character arcs become thematic variations and developments, and structural points (like chapters or acts) become cadences and movements. So when I listen to music, what I am hearing and enjoying the most is very similar to what I also enjoy in movies like Pulp Fiction or Harry Potter (except Chamber of Secrets. Spiders. Ugh).

That in mind, and an arsenal of cartoon expressions at hand, I could explain entire symphonies—mapping the emotion and tracking the narrative—without a single word. Perhaps these wee personalities could even make classical music—like your questionably sarcastic Facebook post—seem a little less serious and just a bit more friendly.

So, I set out on my journey to emojify Beethoven’s Fifth Symphony. The challenge was more a reason to procrastinate than a serious analysis. But after 10 minutes of work, I decided that it was historically significant and socially responsible of me to continue to procrastinate for the greater good of all musicians and music lovers.

Therefore, I give you… Josh Green’s Musical Emojing.

How to follow: The emojis represent significant emotional shifts. This could be a single measure, a phrase, or an entire passage of music. Being that some of this is fairly subjective, I tried to pace the emojis vertically, as to provide a bit more clarity as to where the emotions fall within the musical form.

You can track the pacing of emotions and the back-and-forth dialogue (between orchestra and solo violin) unfolding: 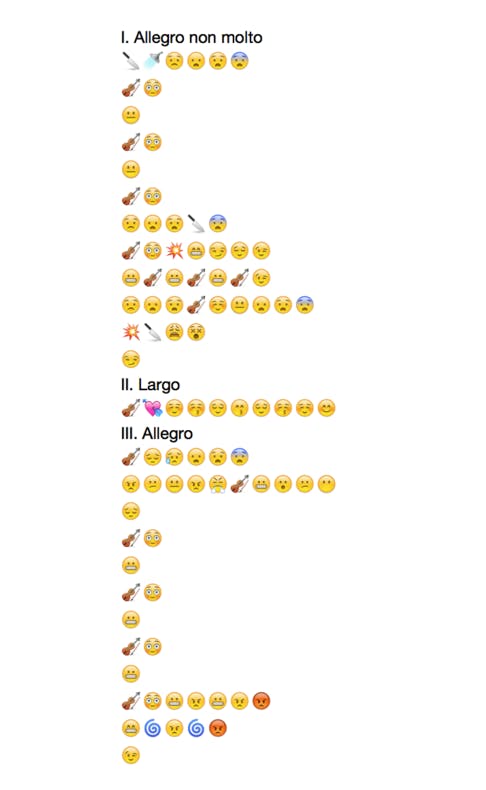 Dun-dun-dun Duuuun! With a lack of instrument emojis, I designated the “evergreen tree” as those funny little double-reed entrances (e.g. oboes and bassoons). For the classically trained, you can actually identify the sonata form with the emoji’s faces! 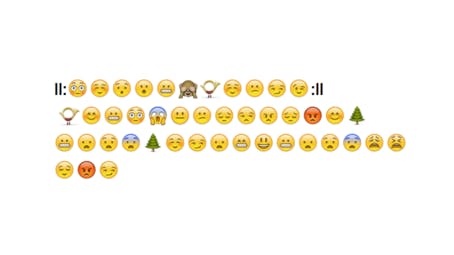 Dvorak’s most popular symphony (inspired by his trip to “The New World”… #murica). You can see how the composer has paced each theme and utilized each cultural reference (the march theme, Three Blind Mice, and “Goin’ Home”).  Not to forget the emotional journey Dvorak takes his listeners on as well. 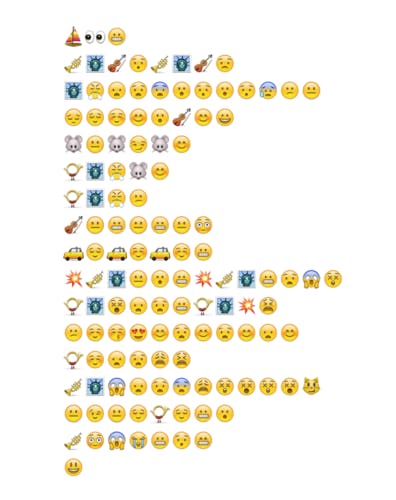 Following up Dvorak, we have Gustav Mahler—perhaps the most wildly emotional of them all. See for yourself! 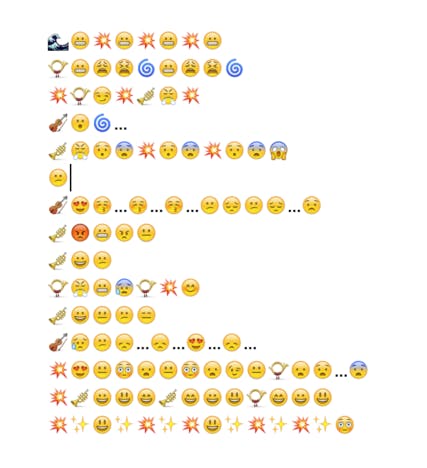 One of my favorites: Charles Ives! The American composer left an enormous legacy in experimenting with traditional songs and hymns. Ives liked to reconstruct recognizable tunes in very jarring or satirical ways that were either the focus of the work, or just a passing thought in a much larger piece. Symphony No. 2 is chock-full of allusions and quotations to the American songbook (“Columbia, Gem of the Ocean,” “Pigtown Fling,” “Camptown Races,” “Joy to The World,” etc.), but the real reason I love this work is for the ending: 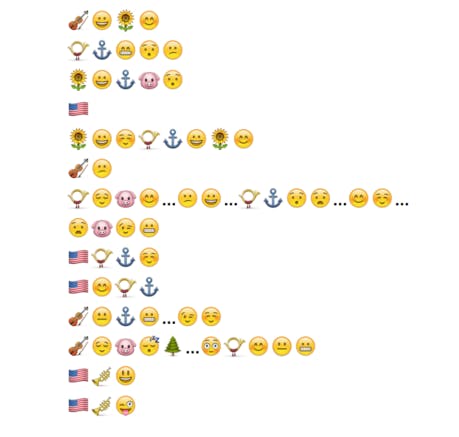 6) Igor Stravinsky: Rite of Spring – The Augurs of Spring

How could I not emojify this one? The Rite of Spring is quite possibly the ultimate emoji.  The Stravinsky/Diaghilev 1913 ballet was interrupted by a rioting audience! Hence the tomatoes. (For historical accuracy: No tomatoes were actually thrown at the premiere, although I wonder if one would actually pack a tomato for the theater… “Honey, do you have the tickets? Did you pack the tomatoes?”)

Igor Stravinsky: Rite of Spring – The Augurs of Spring

Most recently arranged for United Airlines by Hollywood orchestrator Conrad Pope, this one is a classic of the early 20th century. Fun fact: Gershwin himself performed the piano solo at the premiere of Rhapsody in Blue, and freely improvised throughout most of the work. It wasn’t until after the first performance in 1924 that Gershwin notated the part. Unfortunately, other than anecdotes surrounding the events, there are no recordings of this first performance, so we leave it up to our imagination as to what that first draft actually sounded like! 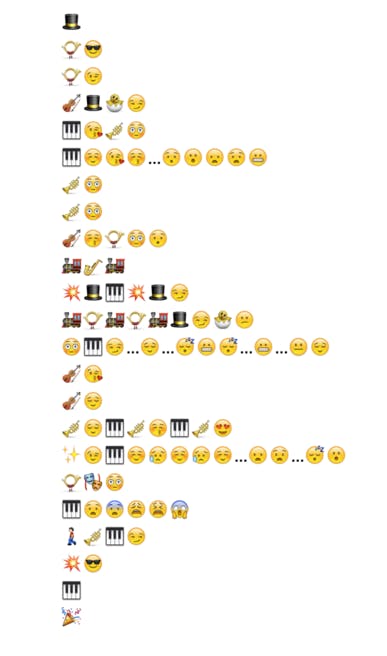 Philip Glass is most certainly a minimalist. You’re probably smirking at the repetitiveness and mountain of endless yellow faces—but take a closer look! The first four emojis are only four measures of music.  Now, track those four faces throughout the work and see how Glass slowly and subtly layers and manipulates the phrase. Minimal but incredibly moving! 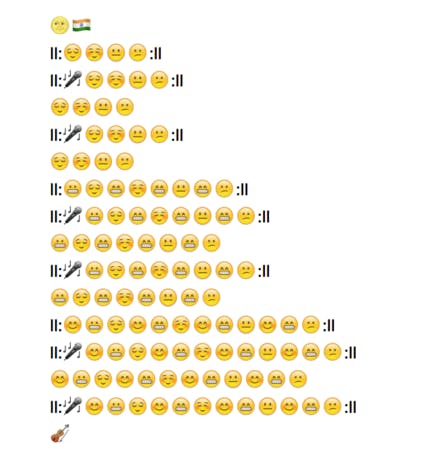 9) Meredith Monk: Woman at the Door

Meredith Monk’s influence on contemporary classical music is immeasurable. If I were going to properly emojify Ms. Monk’s music, I would have to start several decades earlier. However, having attended this exact performance and been utterly floored by the simplicity and poeticism of the work, I felt compelled to include it in this list. Here’s a smidge of background: Much of Ms. Monk’s vocal music, while very contemporary, harkens back to a much more primitive time. Her music blends abnormal vocal techniques in a way that should sound ludicrous, but rather, feel very natural and visceral. In Woman at the Door, the “lyrics” are essentially unimportant. The voice, in this instance, is a very nimble and resonant instrument, making the very end, all the more powerful. 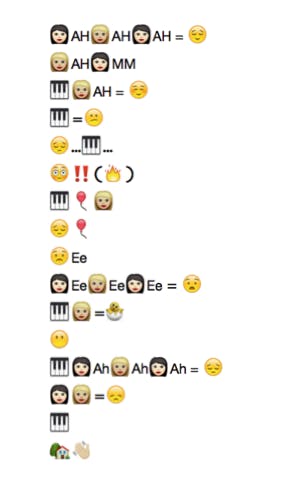 Meredith Monk: Woman at the Door

As much fun as this was, these little personalities only scratched the surface of each work. But what I hope Josh Green’s Musical Emojing did do, is clarify that what classical music is trying to say, doesn’t always have to seem so darn “classical.”

My only regret is not being able to utilize the poop emoji in a meaningful way.  If anyone has recommendations on a famous classical work that purposefully sounds like crap— then throw it at me!

Josh Green is a composer and music supervisor. He was recently awarded the 2016 Herb Alpert Jazz Composer Award. | Illustration via Bruno Moraes