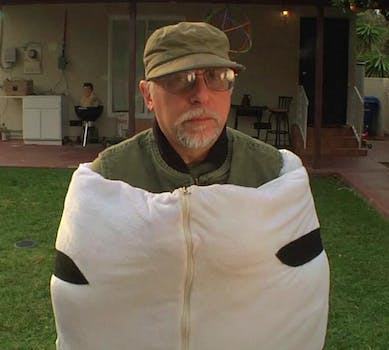 You probably thought Testa's viral-video career was colder than a taxidermied buffalo. Nope!

Is that just another funky dancing-zebra video?

Nope! Chuck Testa, the Web’s favorite taxidermist, is back with a new video.

In the video, two people in a zebra costume dance in a backyard to some funky techno music. As the funny-looking zebra gets down like Napoleon Dynamite, a bust of Elvis Presley stands on the porch in the background. (The bust, when clicked, reveals a secret video; there are others, as well, but we’ll leave those as surprises.)

At the end of the video, the zebra mask comes off, revealing Chuck Testa.

“You probably thought this zebra was alive,” he says, uttering his now-famous catchphrase. “Nope. Chuck Testa.”

Testa and his signature “Nope” became meme legends after his five-month-old taxidermy commercial, also produced by Rhett & Link, went viral thanks to Reddit.

In that video, Testa, 55, shows off some of his mounted animals in the wild and tells the audience, “You probably thought this deer was alive. And this coyote was alive. And this pheasant was alive. NOPE. They’re not. They’re dead. They’ve been taxidermized by Chuck Testa.”
The commercial has been viewed more than 10 million times.

“Dope Zebra” was posted earlier today and has been stuck at 307 views, which is often an indicator that it may be going viral and YouTube is having trouble keeping up with its view count. The video has also gotten picked up on Reddit, Testa’s original online fan base.

The Daily Dot has reached out to Testa for a comment. Any response so far? Nope. But we’ll update if we hear back.