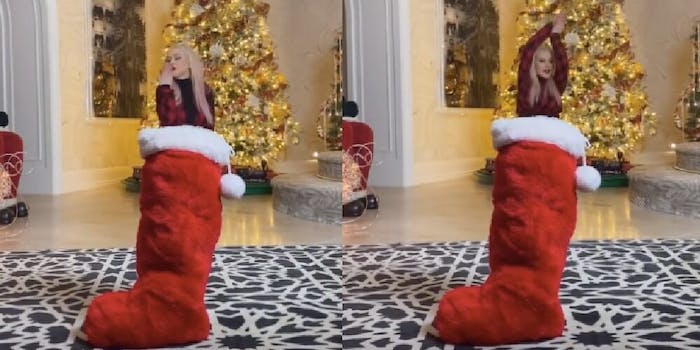 Christina Aguilera participates in ‘Genie In A Bottle’ TikTok trend

'Genie In A Bottle' has been trending on TikTok for days.

The ’90s song “Genie In A Bottle” has been trending on TikTok for days–and it just got more popular.

People are uploading short videos of themselves as they pretend to get inside different containers as part of a viral trend on TikTok, a video-sharing platform. The videos are overlaid with Christina Aguilera‘s song “Genie In A Bottle.” The pop star posted a video of herself participating in the TikTok trend.

Although Aguilera posted herself jumping into a stocking, most TikTok users have shown themselves getting into mugs or cups.

Some people have put a spin on the videos. One of those viral clips shows a teen getting into a trashcan.

Another crowd favorite was a TikTok user trying to “fit” her dogs into a cup.

The trend has received a ton of attention on TikTok, where there are more than 612-million views on videos that include the “Genie In A Bottle” hashtag. Twitter users also chimed in saying they loved Aguilera’s version.

That was actually very clever! And so cute. I love her so much. pic.twitter.com/7WSXlAFM5e

Me when you jumped from that step into the Christmas stocking: pic.twitter.com/CSkZroTK1C

Me joining #TikTok just to follow you! 🧞‍♀️ pic.twitter.com/ms0WXI1rsq