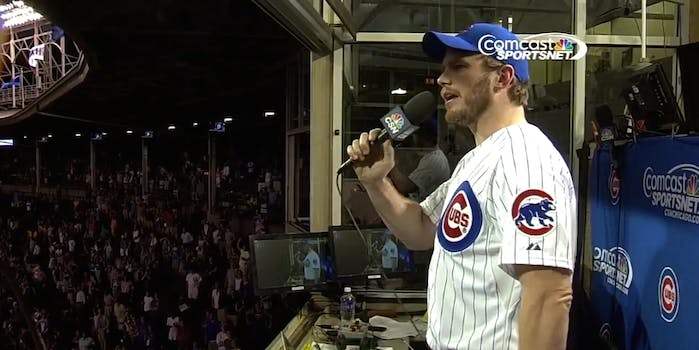 Chris Pratt plays baseball on screen, but he sure doesn’t throw like it in real life

He had to be terrible at something.

Even Chris Pratt can’t do everything.

The star of Guardians of the Galaxy, who’s taken the Internet by storm this summer during his extensive press tour, threw out the first pitch at Wednesday’s Chicago Cubs game. Donning a Cubs jersey and a hat from Groot Industries (a local solid waste management company, not the fan favorite), he tossed the ball out to the catcher.

It may not be as bad as 50 Cent’s first pitch back in May, but let’s be honest, it’s still pretty terrible.

Having completely missed the strike zone, Pratt shrugged it off and was a good sport with fans who wanted to take pictures with him. Later on, he led the crowd in a rendition of “Take Me Out to the Ballgame,” which, if anything, makes him even more endearing—even if he is off-key.