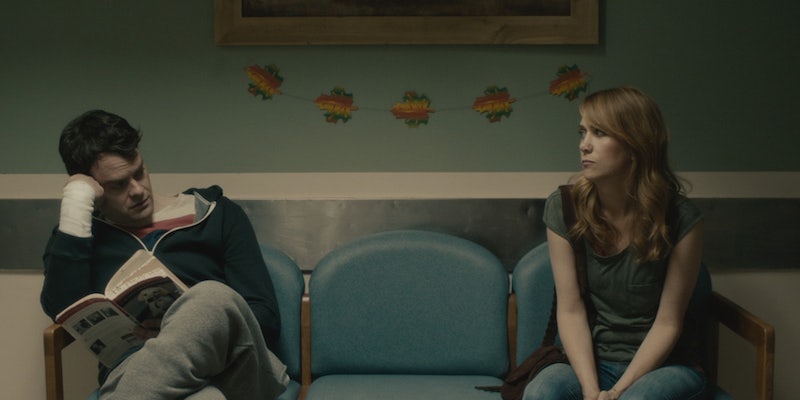 Denver news anchor Chris Parente may have won several regional Emmys for his work, but during a recent interview with comedy veterans Kristen Wiig and Bill Hader, he made an amateur’s mistake.

He mentioned the wrong film, with hilarious results.

Parente’s gaffe sent Wiig and Hader—who were on news channel KWGN’s live morning segment Daybreak to talk about their new film The Skeleton Twins—into hysterics, after they recovered from their stunned shock when Parente asked Wiig to talk about going full frontal for the role.

It quickly became evident that Parente, who’d just raved about what a “great film” The Skeleton Twins was, had been asking Wiig about a totally different film.

The film Parente was referring to is Welcome to Me, which, like The Skeleton Twins, was recently screened to acclaim at the Toronto International Film Festival. Parente claimed to have attended TIFF, but apparently didn’t see either film.

Once he realizes what’s happened, Hader milks the moment. “I’m nude in this movie,” he joked, “and I’m upside down the whole film. The movie takes place on Mars.”

The fun starts around 1:40, when Parente, seemingly out of nowhere, asks Wiig for advice on doing his news program in the nude.

The Skeleton Twins enters wide release this weekend. Despite Wiig’s lack of nudity, the film has received mostly positive reviews so far. We think Parente will like it when he finally gets around to seeing it.